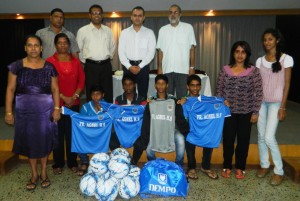 In a move aimed at developing and upgrading football activities at the school level along with creating a greater football community within Goa, Dempo Sports Club has signed a agreement with Fr. Agnel High School situated at Pilar, Goa  by adopting their youth team players.

The adoption program will allow the club and the school to work towards creating a greater pool of players and also impart quality education about various aspects of nutrition, physical fitness and Doping. The school has allowed physiotherapists and nutritionists from the club to deliver lectures to the youth players along with the consent to hold practice camps and community football clinics at its grounds located in Pilar. Pupils from the School will also be able to attend Dempo matches for free. The club too has assured to provide football knowledge and guidance to the school coaches along with its supply of entire football kit required for practice and tournaments.

During the adoption ceremony held at the club house on Friday, Fr. Andrew Silviera, Principal of the school, said that his team would focus on all round development of the players by helping them strike a perfect balance between sports and studies “I am thankful to the management of the club for providing us with this unique opportunity and I assure you that the players will give their best whether it is on the field or in the classroom” said Fr. Andrew. He also said that such programs will be a big morale booster for students and will also help in strengthening the fan base for the club.

Dempo Sports Club Director Mr. Shrinivas Dempo was happy to be associated with the school and has reassured his commitment for youth development.“By associating with schools like Fr. Agnel’s , who have been performing well in recent times, we will help in creating opportunities for young  Goan players  to display their skills on a state level. I am sure this will help the talented youngsters in the longer run”. He also urged the parents who were in attendance at the club house to support the football dreams of their children while also maintaining their focus on studies.