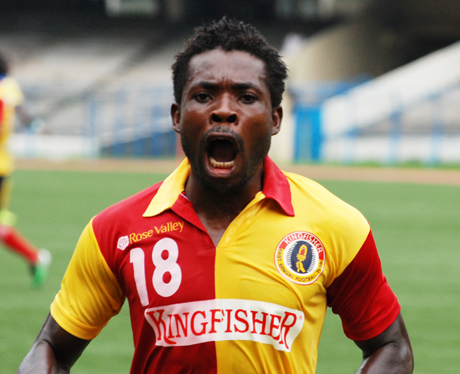 50,000 spectators at the Vivekananda Yuba Bharati Krirangan became part of history as they watched a disciplined demolition of Macdowell Mohun Bagan by Kingfisher East Bengal who created another record of winning the Kolkata League 34 times. It was a perfect gift to coach Trevor Morgan by the East Bengal players who won 3-2. Morgan would be leaving the Club after this game. One also recalls that it was on Trevor Morgan’s 56th birthday his wards had gifted him the other trophy of the season Federation Cup (Incidentally East Bengal had also won the final with an identical scoreline 3-2). With this Trevor have now won 8 trophies for the Club in a span of three years. As for the match the scoreline of 3-2 hardly reveals the dominance of Kingfisher East Bengal in the match. In a practically one sided encounter the Red and Golds toyed with their arch rivals with ease. In the first half East Bengal were two goals up within 27 minutes, Chidi Edeh opened the scoring of a Penn Orji pass in the 23rd minute while Penn himself doubled the lead four minutes later by scoring of Ishfaq Ahmed’s pass. Woodwork denied the victors two more goals in the first half itself. Odafa Okolie scored a fine goal from a free kick in the 39th minute to reduce the margin for the vanquished. On resumption East Bengal continued to attack and Chidi scored a brilliant goal in the 71st minute following fine individualistic skills. Tolgay Ozbey got a consolation goal in the 92nd minute. Uga Okpara (East Bengal), Denson Devadas, Odafa Okolie (Mohun Bagan) were booked in the match.