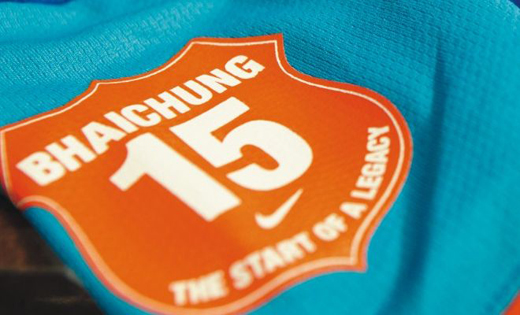 A Legend is born

Village Tinkitam is situated in a valley between two mountains named Maenam and Tadong in south Sikkim. The only connecting road to the town is a narrow pass which is not wide enough for motor vehicle. Villagers looking to access a vehicle need to walk around 1.5 km to reach nearby market place. In this small and remote village there was a house named Chekhmi Kothi in Sangnath area. On 15th December 1976, a boy was born in that house. On that very same day three people died due to pneumonia. Everybody was worried about that boy. So they called the lama from the monastery, he named the boy Ugen Sange. The boy was the youngest of four children. The siblings started calling him Bhaichung, which is an amalgamation of Nepali and Sikkimese words. In Nepali “Bhai” means brother and in Sikkimese “Chung” means youngest or younger. This is how Ugen Sange became Bhaichung Bhutia.

They used to play hide and seek in the valley. That little boy learned how to maintain balance while running in mountains. He learned how to climb trees and how to find way home when he was lost. May be those childhood activities are the reason behind his endurance and stamina. Then his father decided to send him to Pakyong St. Xaviers school. Little Bhaichung left Tintikam and joined his new school’s hostel. It was tough for him to live without parents and his siblings. But there was football to mitigate his loneliness and soon his talent started attracting attention among his teachers and friends. When he was in fourth standard, he was selected for the school team. Though Pakyong St. Xaviers school could not win the tournament, Bhaichung found a place in U–12 Sikkim team.

The school championship was held at Delhi. It was the first ever capital trip for young Bhaichung. He dawned the no. 6 jersey in that tournament. He did quite well in that tournament and found himself under the scanner of SAI & TFA. Soon after the tournament he got admitted to Tashi Namgyal Academy. Manas Chakrabarty, the football coach from SAI, was one of the his first formal football coach. The school ground was situated in between two cliffs which were full with leaches. One of the goal post was located towards a cliff. Manas made a simple rule; the one who misses the target he has to get the ball back from the leach infested area.  Perhaps this simple rule made Bhaichung’s shooting skill better!

Soon Tashi Namgyal Academy got a chance to participate in Gangtok league where Bhaichung played as an attacking midfielder. He had been playing well in the league and was attracting attention of many people. One of them was Karma Bhutia. Many consider Bhaichung’s meeting with Karma Bhutia as the turning point of Bhaichung’s football career. Bhaichung became the footballer of Gangtok boys club in the year 1989 as insisted by Karma Bhutia. Till then he used to wear no. 6 jersey. Karma Bhutia, popularly known as Bhaichung’s Karma uncle, wanted to have a different number assigned to him. Bhaichung initially wanted to wear no. 10 but Karma Bhutia was concerned that wearing no. 10 would attract attention of opponents. So,Karma Bhutia advised him to wear a different number, preferably an uncommon one. After a quick thought it was decided by little Bhaichung that he would wear no. 15, thus immortalizing jersey no.15 forever in Indian football.

From then, Bhaichung always wore no. 15 except two occasions. One was during his tenure in Bury FC where he was the no. 9 player and wore no. 12 for East Bengal in 2003-2004 season as the no. 15 was already allocated to Douglas da Silva.

Playing for Gangtok boys club opened the door of competitive football for him. He got a chance to play in Sikkim Governor’s Gold cup where he played against the big clubs like Mohammedan Sporting Club and Mohun Bagan. There were many ex-footballers and Kolkata club officials. East Bengal officials approached Karma Uncle for signing Bhaichung. Karma Bhutia conveyed the message to Bhaichung’s parents. Initially Bhaichung’s family was reluctant to let him sign for East Bengal. There were two reasons – one issue was that Bhaichung was too young and the other was regarding his school leaving examinations which were very near. Karma Bhutia convinced them that this was the once in a life time opportunity. Eventually, they agreed to let him play but with one condition that Bhaichung had to pass the exams. Bhaichung had very little time in his hand but the footballing legend passed the exam with that little preparation. Then in the year 1993, Bhaichung Bhutia left the hills and came to Kolkata to play football for East Bengal. And the rest is history!