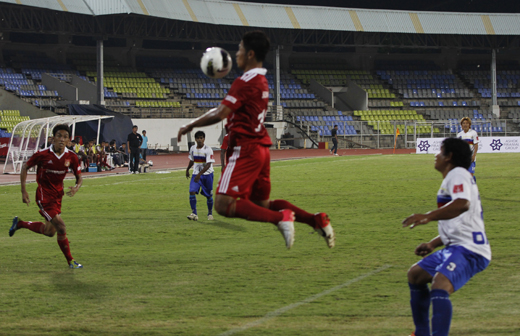 PUNE:  Pune FC rode on to Shanmugham Venkatesh’s 71st minute strike to win their I-League season opening match against ONGC FC 3-2 after surviving 15-odd minutes of freight when the home team was reduced to 10-men, at the Balewadi Sports Complex stadium here on Monday (October 8, 2012).

Venkatesh, who captained Pune FC in their debut season, combined with skipper Douhou Pierre from the left as the two exchanged the ball between them twice before he lobbed the ball into the right top corner of the post leaving ONGC custodian Prosenjit Ghosh flabbergasted in the 71st minute.

But for that goal, it was ONGC which took the game into Pune FC half on changing then ends that saw the visitors even out 2-0 deficit though Katsumi Yusa’s 30-yard wonder.

Pune FC had taken lead through Jeje Lalpekhlua’s spot kick in the 22nd minute before Subhash Singh collected a long ball from the left and fired from the top of the box to put Pune FC 2-0 ahead in the 48th minute.

But the home team’s celebrations were short-lived as ONGC made a gutsy comeback, first through Jatin Singh Bisht, who deflected the ball on a minus from Mumtaz Akhter and then Katsumi equalized through a great shot from 30 yards.

In the injury time Pune almost had freight when the ball hit the crosspiece and goalkeeper Shahinlal Meloly failed to collect. But the ONGC strikers were not in position to guide the unattended ball right of the post.

Earlier, Pune FC clearly controlled the match, but for a few patches of defensive lapses that saw the ONGC FC sneak into the home team’s forte.

Home team captain Douhou Pierre was left to do much of the hard work after his fellow midfielder James Moga had to be taken to hospital for medical attention. Just before the match, Moga started complaining of stomach pain and he vomited before he was taken to a nearby hospital.

Subhash Singh went in as substitute and made most of the opportunity as he moved up and down the right wing setting up chances upfront.

Douhou controlled the left wing with Karma Tsewang for support as the two created a fantastic chance in the 17th minute. Douhou rushed into the box from the right and sent a cross into the middle from Karma, who failed to control the shot as the ball just missed the post.

Five minutes later Subhash collected the ball from corner at the top of box but his left-footer was handled by the ONGC defence forcing the referee to show the spot. Jeje Lalpekhlua made no mistakes in putting Pune FC ahead with a cheeky grounder.

ONGC took their time to get into the groove, but the visitors did show that they had in them to take on the top teams of the I-League. In the 30th minute Japanese mid-fielder Katsumi Yusa fired a blinder, but home goalkeeper Shahinlal Meloly showed he had good hands.

Five minutes from half-time, ONGC missed a golden chance to equalize when Katsumi got a ball from right, but he failed to collect standing less than a yard from in front of the goalpost.