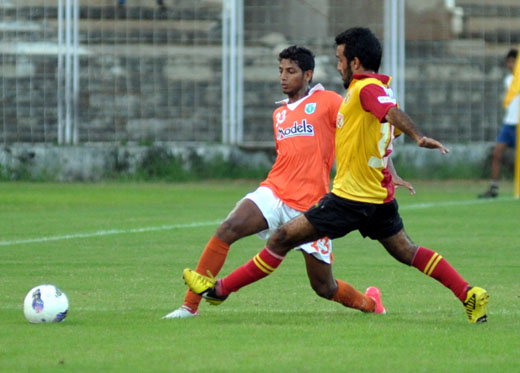 MARGAO: Sporting Clube de Goa frustrated East Bengal with a goalless draw in their opening match of the I-League at the Nehru Stadium, Fatorda, on Sunday (October 7, 2012).

East Bengal had plenty of possession all through the match but could not translate their apparent superiority into goals.

Sporting Clube took the field without a foreign player but still managed to create panic and a couple of clear cut chances in the first session.

Burly striker Dawson Fernandes was at the heart of all the moves as he troubled stopperback Uga Okpara. The best opportunity came in the 40th minute when a overhead ball from Rojen Singh saw Dawson sidestep Okpara and all alone with only the goalkeeper at his mercy. But Dawson, much to the dismay of the local supporters, shot straight at the East Bengal goalkeeper Abhijit Mondal.

Sporting’s previous chance brought a fine save from Mondal. This time it was Jovel Martins’ cross that created panic but when Macroy Peixoto’s lunging attempt seemed headed for goal but Mondal did just enough to get his fingertips to the ball.

East Bengal’s chances were few and far between. The most clear-cut opportunity fell at the feet of Edeh Chidi but the Nigerian striker flicked wide after being nicely put through by Ishfaq Ahmed.

In the second session, East Bengal continued to press in search of the equaliser but the Sporting Clube rearguard gave a good account of themselves. Chidi, once, was presented with a clear look at the goal before being dispossessed by captain Samananda Singh.

East Bengal striker Baljit Singh failed to beat the rival goalkeeper in a one-on-one situation with just seven minutes on the clock.