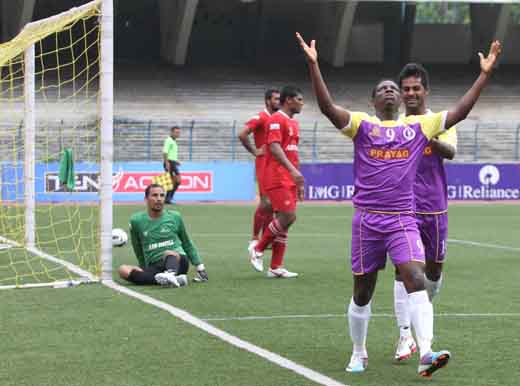 KOLKATA: A 10-man Prayag United SC showed great understanding and resilience to crush a full-strength Air India 5-1 in a first round match of the I-League at Kolkata’s Salt Lake Stadium on Sunday (October 7).

Mickey Fernandes provided the lone reply for Air India. The home side played from 70 minutes with 10 men after its Nigerian defender Bello Rasaq was sent off in the 20thminute.

United SC moved from dejection to elation in the first half as it lost Rasaq to a direct red and then regrouped to finish with a 2-1 lead. The home side built up on a positive start and found the lead early in the 13th minute when Ranti Martins nodded home a nice assist from Shylo Malswamtluanga. United SC suffered a blow in the 20th minute seeing their dependable central defender Rasaq sent off with a direct red card. Referee Pratap Singh, who is one of the three referees to receive a professional contract recently, penalised Rasaq for dangerous play when the player had a collision with Air India striker Henry Ezeh.

Malswamtluanga came close to re-establishing United’s lead but his 29th minute attempt came off the Air India horizontal. Ranti produced the desired finishing in the 32nd minute when he neatly nodded home a cross from right-back Dipak  Mondal to make it 2-1 for United at the break.

The fine understanding between the two costliest players of the team – Ranti and Costa Rican Carlos Hernandes – reached a crescendo after the break in the 57thminute. The two played a series of one-two-one to get the Air India defence on the mat before Ranti bulged the opposition net with a rasping left-footer from top of the box to complete his hat-trick (3-1).

This started the goal riot for United SC Ranti took the provider’s role setting up Asif clear of the Air India defence in the 65th minute. The midfielder sent a powerful drive that beat the Air India custodian Sukhwinder Singh all ends up (4-1).

A shattered Air India defence conceded another goal in the 80th minute when Vineeth, released by a long floater from Hernandes, found the net with a sharp grounder to complete the visitors’ humiliation.