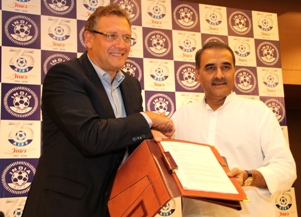 Even FIFA Secretary General Jerome Valcke feels that FIFA Rankings do not always reflect a team’s quality. The likes of Syed Rahim Nabi and Sunil Chhetri have been maintaining after the Nehru Cup treble that India are a much better side than what the Rankings project. It is just that they need to play more matches against top teams on FIFA dates.

On Wednesday at a media gathering in Le Meridian, Valcke accompanied by All India Football Association (AIFF) President Praful Patel, reiterated it once again. “FIFA Rankings are very complicated. To climb the ladder in the Rankings you need to play on FIFA dates and with competitive sides. Otherwise your good show won’t reflect,” said the 51-year old Frenchman after President Patel highlighted Nabi’s statement that India are a much better side that what the Rankings reflect. Valcke added: “Our main objective is to develop domestic football and bring it to the International level. People would take interest in watching Indian Domestic League and not only the English Premier League and the La Liga and so on. We want to improve the infrastructure as well.India is a large market and I cannot believe 1.2 billion people only play just cricket!” “This is the reason we want the U-17 World Cup in 2017 to take place in India. We aim to host World Cups in countries where football development is needed. India stays out primary area of focus. We have our Developmental Office in India,” he continued.

“That proves how serious we are about the 10-year project with India from 2012 to 2022. In between we have the 2017 World Cup bid and India’s aim to qualify for the “2022 FIFA World Cup in Qatar.” AIFF President Patel stressed that Valcke’s visit stays a very significant one. “We have been fortunate enough to have President Blatter and now Mr. Valcke visiting India in the same year.It depicts FIFA’s interest in developing football in the country.” “Indian football is poised for a big leap after days of hibernation. We are ready to shake off our stupor and FIFA is supporting us in our cause. They are going out of their way to see India emerge as a strong Footballing Nation.”

He further maintained: “We have to start early if we want to grow as a Footballing Nation and develop the grassroots. We need to work on the pyramid and that stays the main objective of the Federation. Unless we have players being nurtured from the age of 12-13 we won’t grow.” “We have a 10-year Master Plan called Lakshya and our aim is to qualify for the 2022 FIFA World Cup.”

Patel and Valcke also signed an agreement on this cause. Complementing Patel’s statement, Valcke felt “India stay an integral part in Asia’s development.” “India has to be one of the centre point of Asia to develop football,” he opined. “There is no football without grassroot programme,” he reiterated. “The U-17 World Cup is the perfect milestone to succeed it.” Patel signed of on a smiling note. “Our request to FIFA would be to provide us with a dozen more artificial turfs.

FIFA has provided us with eight of them previously during the ‘Win in India in India’ project. Financial help is also solicited.” Sitting next, Valcke smiled. “It would be a pleasure to serve Indian football. You know I cannot want to see football as the number one sport in the country. Sorry cricket!”