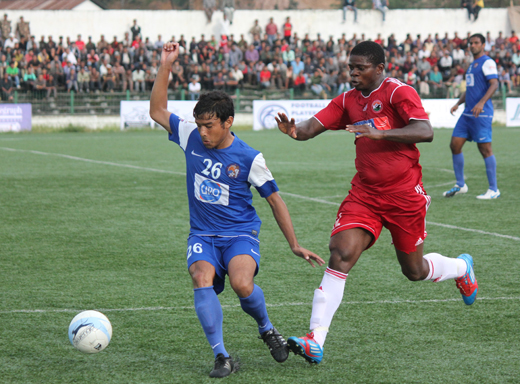 In what was the final league game of the JPR organized “North-East Lajong Super Series”, which was played at the J.N Stadium, Shillong Lajong Football Club produced some scintillating football to outscore I-League newcomers United Sikkim FC by three goals to nil. Needing an outright win for a spot in the final against A-League side Wellington Phoenix, Shillong Lajong began the match in emphatic fashion with a 7th minute goal by Friday Gbeneme.

The newly signed Friday created havoc in the Sikkim defense and capitalized on a defensive error to slot home his team’s first goal, even as the crowd was beginning to settle down, 8 minutes later, the Nigerian added another, when he scored off the rebound, which resulted from a free kick from just outside the box. The home team, spurned on by the vivacious crowd, went on offensive mode right throughout the course of the second half, with United Sikkim having  little chances at goal.

The second half saw an improved Sikkim performance, with more chances at goal, but it was the home team who looked more threatening in front of goal. Friday then put the match beyond doubt when he scored his third goal of the match, and his fifth  in the tournament,sending the crowd into ruptures of elation.

Shillong Lajong FC will now square off in the Final against Wellington Phoenix FC on the 1st of September, at the J N Stadium, at 3:15 pm.