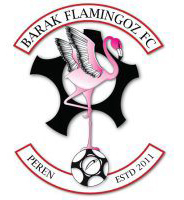 In the inaugural season of  Nagaland Premier League, Barak Flamingoz emerged as the champions, staying ahead from their nearest rival, Naga Tornadoes, by two points. Ironically, Naga Tornadoes are the only team who have remained unbeaten throughout the tournament, but losing crucial points by getting too many draws. Barak Flamingoes ended up winning 14 , earning 2 draws and lost 2 games. New Market ended up at the bottom, winning a single game on last match day, before which they could only muster 1 point in 17 encounters.

Barak Flamingoz are from the Nagaland district Peren and one of their motto being ‘football is more than just a game’. After winning the last match against Sangpang in Mokokchung by two goals to nil, Barak fans and management were elated. Barak Management send the following message to the fans in facebook –

“We have done it! We are the champions of Nagaland. Thank You to everyone who have been supporting and praying for us since day one. We, the BFFC management, will forever cherish today. What we have achieved today is not for ourselves. It is for everyone who has been behind us. Your endless support has made this achievement even more meaningful for all of us. It humbles us and we are hopeful that we’ll achieve many more things in the days ahead.

Nagaland Premier League which started one of the most exciting leagues in India, which massive promotions, exciting clubs who connect well with locals, detailed match previews and reviews and promotion of ‘social causes’ like AIDS awareness, Sanitation etc. The league also faced hurdles like poor turfs, poor refereeing among many others, but being in their first season, they have done commendable job and with time one can only expect to grow and bring more accolades. Local leagues like NPL should be a model for many more states in India to follow.