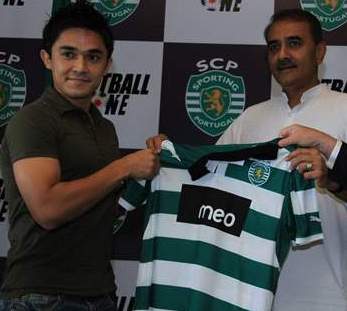 It is the ultimate irony, India’s skipper Sunil Chhetri was struggling to find an Indian club but has been signed by top Portugal club, Sporting Lisbon.

Chhetri will join the Sporting Lisbon reserve team for now, a sensible decision as he can get more playing time than he did in his stint with the Kansas City Wizards in the Major League Soccer in 2010. With 33 goals in 58 appearances for India, the nippy and short-statured striker will play in the Portuguese second division known as the Liga de Honra.
The Indian skipper had unsuccessful trials with Coventry and Celtic of Scotland earlier. During these trials he realised that the pace of the game is much faster abroad and tackles are harder. Chhetri was not content to remain a big fish in a small pond. He wanted to expand his horizon and by joining Sporting Lisbon, has fulfilled a dream.
Last season he played for Mohun Bagan and reportedly earned `90 lakhs. It is likely he will earn less in Portugal but kudos to Chhetri for his willingness to take the challenge and trying to gain vital exposure. He represents the new breed of Indian players exposed to international football via satellite TV and the internet and dreaming big.
In recent years two other national players unsuccessfully tried to secure a foreign contract. Goalkeeper Subrata Pal made a favourable impression at Vancouver Whitecaps but the club wanted an outfield player as their third foreign recruit. Defender Gourmangi Singh also had trials with the Melbourne Victory two seasons ago but was not chosen. This season midfielder Mehtab Hossein has gone for trials with Exeter City in England, arranged for him by his former East Bengal team-mate Alan Gow.
This adventurous attitude is in sharp contrast to the former greats, who were more content with middle class stability and security of a bank or public sector job, instead of trying to improve their football skills abroad. It is learnt that after India won the 1962 Asian Games gold medal, both Chuni Goswami and Jarnail Singh had offers from foreign clubs but declined. In the late 1970s dashing winger Surajit Sengupta was tempted with a lucrative deal by a club from UAE but did not budge.
Chhetri tried to get an Indian club. His agent, Yogesh Joshee, made a short visit to Goa and held discussions with three of the four top teams in the state. But the deals never materialised as he insisted on a clause of being allowed to leave if foreign clubs came calling.
The signing of Chhetri by Sporting Lisbon could alter the way foreign clubs look at Indian football. Sporting Lisbon are not like other famous clubs targeting as potential customers and fans, the English speaking middle class’ craze for international football. Instead it is learnt that the club’s president Luiz Godinho Lopez is projecting Chhetri as Sporting’s face in India, to line up several commercial activities. To attract more sponsors, the club are also planning to tie-up with a broadcaster to telecast their ‘B’ team matches live in India and China.