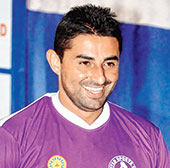 Hernandez left Melbourne Victory at the end of the 2011-12 season, having spent five years at the A-League powerhouse, where he scored 36 goals in 122 games, including 10 goals last term to finish the club’s top scorer.

Here are just a short sample of things that Prayag United fans and other footballing fans alike would love to ask Carlos.

Carlos promises effort, distributes praise and confesses that his only desire was to play in India. ” There were several offers from other clubs… But I always wanted to come play in India… “, revealed the Costa Rican player in his first interview in Purple.

You said that your only desire was to play in India, so this must be a dream come true.

CARLOS: Yes, that’s true. There were several offers from other clubs… But I always wanted to come play in India… Apart from Prayag United SC, there were two other Indian clubs who showed interest. I think they disagreed with Melbourne Victory on the transfer fee, But Prayag United SC were very patient.They sorted out all the issues and made a very good offer. I really liked their approach and their proposal. Their plan for the 2012-13 season really impressed me.

What went through your mind as you signed your new contract with Prayag United SC?

CARLOS: I honestly didn’t think of anything. I am a Professional player. Being here with Prayag United SC and signing a contract is like a happy moment for me.

It was an exciting and entertaining last five years , which ended this year with Melbourne Victory, And how do you think the people at Melbourne Victory will feel hearing you say that you’re staying at Prayag United SC ?

CARLOS: I have many positive memories with the Victory supporters. Being chosen as the Johnny Warren medalist, being top goal scorer twice and winning the championship.  But the most important memory that I will always keep is that of being one of the fans favorites. I will miss the love and support the Victory fans gave me and my family.

What were the reasons that made you want to leave Melbourne Victory and finally come this Football-crazy Kolkata?

CARLOS: I had some differences with the team management at Melbourne Victory. We could not reach an agreement over an issue.

What feelings and emotions come to the fore now, after spending few days here at Calcutta? What do say about Calcutta as a football city?

CARLOS: Ohh… Calcutta touched my heart within a few days. This is a beautiful Country . It has been a fantastic experience for  me. So many supporters  cheer for me and for the team. I have got good support from the officials, as well as the supporters. I also listen that Calcutta has a very big football craze.

Are you anxious to start working with Prayag United SC and your new peers?

CARLOS: Of course I am. Now this is my team  in the world and I m very much excited to meet with my team mates. It makes me proud to have the chance to work with this team and a template full of great players.

What will be your target in Prayag United? Can we expect a successful season this year?

CARLOS: At first we need to make a unit, need good understanding, plan and execution. Football is a team game, so we need to make a team first.
I know they didn’t win any trophies last season. So, it will be a challenge for me to win titles for them.

What are your personal targets for the upcoming season– with the club and the national team?

CARLOS: I am looking forward to this new opportunity and challenges. My aim is very clear to win the I-league, Federation Cup and qualify for AFC Cup for my club.
As per as my national team concern, I have always a dream to play for my Country and win the World Cup qualify round matches.

Now you are the player of United SC — a club of the 164th ranked India — can this matter hamper your chances of playing in the national team?

CARLOS: I don’t care in what position India are. If they are in 164th position, I think there are a lot of chances to improve. I have also spoken to the national coach Jorge Luis Pinto. He said as long as I play quality football, there is no reason why I cannot feature in the national team.

You’re a great athlete. Please tell us how a Carlos will use the pre season camp specially Prayag United has a world class and also be India’s best physical trainer Garcia??

CARLOS: It is good, especially for Prayag United SC. Having quality physical trainer  like Garcia is good for any side. I will work hard to play. We will compete for win and the team will benefit from that. That’s all that matters.

CARLOS: It was a dream come true. No feeling is parallel to playing in a World Cup.

You know the I-league, the major tournament of India. What’s your opinion about it?

CARLOS: It is a very competitive League and it has many solid teams. I am anxious to play in the I-league, Federation Cup  and to win it with Prayag United SC.

What is the recipe of your success?

CARLOS: I consider myself a player who works hard. I try to do everything for my team wins every game. That’s my best attribute; I can run, shoot…

In which position you look like to play here?

CARLOS: I want to play behind the strikers and want to play the role of a playmaker to perfection. But then if the coach wants me to play as a striker, I don’t have any problem. I always believe football is a team game.

Have You any problem with Astroturf Surface for play, which is here at Saltlake Stadium?

CARLOS: No, Not at all… I am very much habituated with this surface and played so many matches on this type artificial ground. As a professional player you always need to suit with any type of environment and here environment is very much pleasant.

Who Is the Best Player You Have Ever seen in World Football?

CARLOS: Zidane. Highly I rate Zizou. He is a real game maker for me.

We all know that Ranti Martin also joined first time to play here, What are the chances, according to you, of Prayag United winning the I-League this season?

CARLOS: I think he’d have been a great acquisition – just bear in mind the amount of goals he scores. I have it clear. Win all the competitions we play. But always I say, need to make us a unit.

This will be your 1st season in Kolkata. What would you like to say to the fans of Prayag United SC club?

CARLOS: Keep supporting us. We will give our best and will surely win trophies this year. I will try to give you some special moments.

When you start your professional career as a footballer and which one your first memorable achievement as a player?

CARLOS: Well, I began my club career with LD Alajuelense, a top side in the Costa Rican national league in the 2001 and first major win with Alajuelense , the CONCACAF Champions Cup in 2004. But no feeling is parallel to playing in a World Cup.

Tell us something about Costa Rican soccer culture? Can others big player like you will have any chance to come India for playing football?

CARLOS: We, Latin American always spend our life with Football. We love Eating, Sleeping and playing Football.
Costa Rican very much aware about Indian football market. There have so many big players who have real interest about India, will come here in future and I hope that for them I am the follower.

What are your future plans and any chances of your coming to club coaching?

CARLOS: No, I have not a single interest to make me as a Coach in future. I always happy as player and after ending my career I need to share my life  with my family.

Thanks for talking to us and best of luck for the new season to you.

CARLOS: Thanks a lot and for fans I want to assure you that I will give my best to help Prayag United SC win as many trophies as possible.

“Dream On, because all that’s big and great started as a dream.”