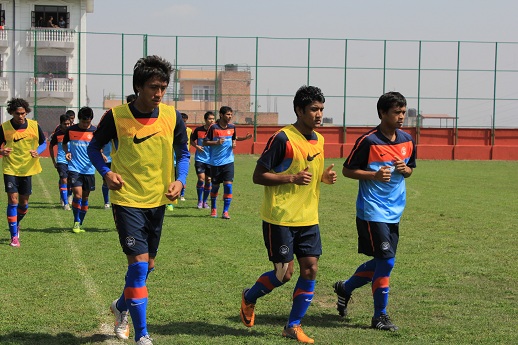 NEW DELHI: National Coach Wim Koevermans has named 37 Players for the Preparatory Camp for the Nehru Cup which kicks-off on August 23, 2012. Seven players who did duty for India in the recently concluded AFC U-22 Championship in Muscat have also been named for the Camp. The Players will report to the Camp on July 27.

“I’m happy to find players for the start of the preparation of the Nehru Cup and I’m looking forward to work with them and start developing the team together along with the support staff,” Koevermans told www.the-aiff.com.

Koevermans who watched the exploits of the Indian team in the AFC U-22 Championship in Muscat have also summoned seven players from the U-22 Team. Besides strikers Jeje Lalpekhlua and Manandeep Singh, midfielders Lalrindika Ralte, Milan Singh, Alwyn George, stopper-back Shouvik Ghosh and goalkeeper Gurpreet Singh Sandhu have also been named in the list of 37.

“In Muscat the U-22 boys did put up a good show. I felt it best to call some of them for the Camp to see how they cope up with the Senior Team players. It’s a different level after all,” he added.