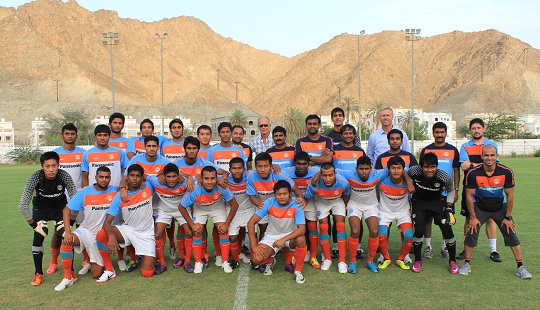 The tension builds, the focus increases. Head Coach Arthur Papas and the boys refuse to get into the permutations. But we have to.

India play hosts Oman for a berth in the U-22 Asian Cup in their final encounter at the AFC U-22 Championship on Tuesday (July 3). Both India and Oman stay on seven points from 4 matches at the moment — India ahead on goal difference (+5 in comparison to Oman’s +1). The situation demands a win but that doesn’t guarantee a spot in the final phase.

Both Iraq and United Arab Emirates stay on 10 points and only an Indian victory and an Iraqi victory against UAE will see India through. In case of any other result, it’s exit bells.

“Hey, it’s complicated,” Papas clarifies. “Let us try for a victory against Oman. We take the field to win every match, whoever the opposition may be. We have improved with every match so far,” he adds.

“But Oman are very capable side. Not only are they ahead in the FIFA Rankings (97 in comparison to India’s 164), but they also boast of some very talented individuals. We go into the match as underdogs,” he maintains.

National Coach Wim Koevermans, who has watched two of India’s last matches and has made it a point to be there at every practice session along with Technical Director Rob Baan, says: “No match is ever easy. In football you have to fight on the field.”

The boys stay ready for that. Half an hour after the match against Turkmenistan, bound by habits, the boys had taken right – the route from the Dressing Room to the Team Bus. The battle on the left (against Turkmenistan) had been won some minutes back; Oman stayed the next challenge. But Jeje Lalpekhlua looked right, left and centre. “Looking for someone, Jeje?” you ask.

“Where’s the Coach?”Spotting Papas bringing out video camera, Jeje enquired: “Can we watch the next game, the first 45 minutes?” Oman were slated to play Iraq next. “Off-course you can!” Papas allowed. The boys changed direction – left became right, they proceeded towards the chairs.

Post dinner, the boys headed straight to the Meeting Room. No, Papas wasn’t there; the support staff weren’t there either and neither were they following any instructions.  The boys just wanted to have a talk between themselves. There was Jeje, there was Lalrindika Ralte, there was Abhishek Das, Gurpreet Singh Sandhu, Prathamesh Maulinkar, Alwyn George – the entire bunch. The meeting went on for more 15 minutes.

On being asked, a reluctant Abhishek Das informed next morning: “We talked as to how were not in our usual self against Turkmenistan in the second half. Against Oman, we need to back each other more – both on and off the field.” You gauge, it was an emotional meeting which set up a specific target.

“Meetings can lead you on the right track. They won’t win you the match. Against Oman, we need to give our 200 percent on the ground. Try your Best and Leave the Rest,” a philosophical Jeje Lalpekhlua, opines, even as Masseur Santosh Chacko’s nimble fingers make him feel rejuvenated.

There’s another room which stays the favourite hunting ground for all players – Room No. 220 to be precise, where Team Physio Kazi Juyef Islam stays. He stays busy 24×7 treating the small niggles. Sometimes he scolds the players for being even 30 seconds late, but they don’t mind.

Jeje’s fellow striker Manandeep Singh, while getting his treatment done says: “This is our last shot. Oman are a hard side to beat; very speedy. But it’s our best chance.”

Alwyn George who has scored four goals in three matches so far feels: “The key stays in sticking to our plan. It’s a game for 90 minutes. We can’t hurry and neither can we wait for long. The Coach has specific instructions and we need to carry them out.”

The players take a long breath as they walk almost every step. There can be no halt and they know they need to be energetic and greedy but at the same time, balanced. 90 minutes sometimes pass off too quick; the weight of International Football is immense.

Even as every other team hurried off for a practice session, Sunday stayed an off day in the Indian Camp. “The players need to recover,” Papas defines. “Sometimes they too need a break.”

The Championship has given the chance to measure us at the International Level. Prior to the kick-off, if you are honest, you’ll have to admit none had thought India would be alive and ticking in the last match, especially in a group with Iraq, UAE, Oman, Lebanon and Turkmenistan. ‘Results don’t matter at this stage, the development does.’

Early morning on Monday, Abhishek walks into the room and sits for a while. Not someone to sit still for long, he flips through Abhinav Bindra’s ‘A Shot at History,’ and stops at a certain Page. You hear him murmur: ‘Whatever your mind can conceive, your heart can believe, you can achieve.’