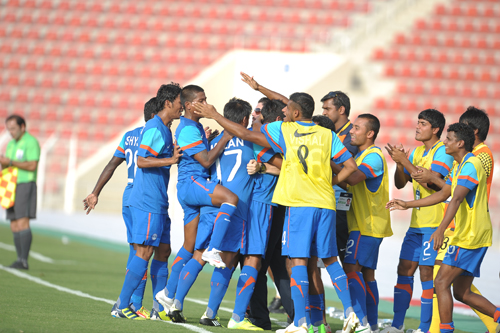 It was a tribute, the best that one can give to his loving grandfather. It was a gift, the sweetest one that AIFF might have recieved on its 75th birthday.

Manandeep Singh, the brave heart, the Blue Cub, who chose to play for the Indian U22 football team with a heavy heart, mourning the demise of his grandfather, could not do it in a better way.

Lalrindika Ralte sends in a precise cross that finds Manandeep at the end. He nets the ball home with a scorching header.

Right into the second half Lebanon reduced the margin. Their super-sub Omar Kurdi cut the ball through Souvik Ghosh and Deepak Devrani to make it 2-1. Lebanon was back into the game.

Known for his superb dribbling skills, Alwyn George did not let the Lebanese celebrate for long time. Receiving the ball in the opponents’ half, he fooled 3 defenders to slot the ball home. India were swaying ahead.

Once again Lebanon was breathing close when Abdul Fattah scored by tapping the ball in the melee created in front of Indian goalpost.

Jeje Lalpekhlua had substituted Manandeep by then. A great statement was made when he replied back with a goal just 1 minute after Lebanon scored. He put the ball in from the right corner of the penalty box.

Earlier a powerful shot from Lalrindika hit the post and returned. But that goal was due and Jeje made it 5-2 in the 90th minute when he received a ball from a corner to complete the story.

A cause of worry for India was receiving 5 yellow cards in the match.

India played possession football, changing the pace of the game according to the situation. Sometimes they would disrupt the rhythm of the Lebanese team, sometimes they would increase the tempo. Arthur Papas fielded one conventional striker, which means India is now following the global trend of having a lone striker.

– The team dedicated the victory to Manandeep Singh and his family.

– After the match, Arthur Papas and assistant coach Narayan Menon went for the Iraq game to watch their next opponents closely.

– In the other two matches of group A, UAE beat Oman 2-0 and Iraq won 4-0 against Turkmenistan.

With inputs from : Nilanjan Datta (AIFF) and Rudra Nayan Das