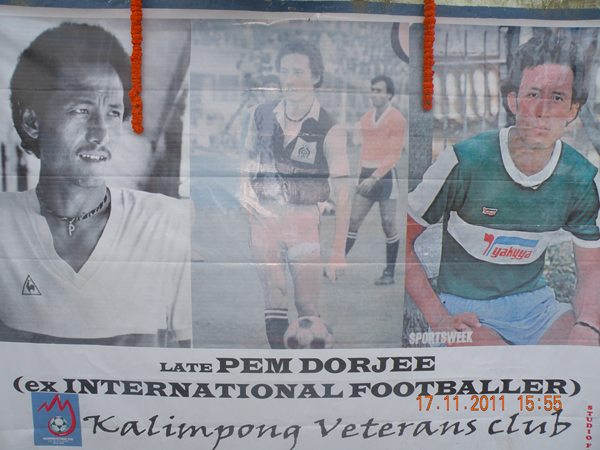 The small hill town of Kalimpong has found a fitting way to pay tribute to its sporting heroes of yesteryears, mostly Footballers, by organising a football tournament in memory of Late Pem Dorjee and Late B B Pradhan both great players of their respective times.

Pem Dorjee (Nilu) as we all know was a talented stopper of his times and went on to Captian the National Team. Born at Gangtok in the year 1958,he did his schooling from Kalimpong.He played for almost all the big clubs of the country and earned respect and love of the people where-ever he went and played. He had started his footballing journey in Kalimpong playing for his school team Scottish Universities’ Mission Institution (SUMI) and later on he moved to Sikkim and settled there. Pem Dorjee passed away in the year 2001 after prolonged fight with Cancer.

B B Pradhan was also a wonderful player of his times and started his career with Kumudini Homes School and went on to play for the Bhutan National team.

Kalimpong Veterans Club is Organising this “Veterans Football Tournament 2011” where 19 Veterans team from across the region including the neighbouring countries of Nepal, Bhutan and Bangladesh is taking part. Eligibility for players to participate in this tournament is that they should be above 45 years of age.

The tournament kicked-off on 17th November at Mela Ground, with the first two games taking place.In the first match Darjeeling defeated Namchi in the penalties whereas in the second games Zongri (Sikkim) defeated Jalpaiguri (which had 2 former East Bengal players) 3-2.

The Chief Guest for the opening function was the former Minister of Sikkim Mr Thukchuk Lachungpa who spent is student days in Kalimpong attending Scottish Universities’ Mission Institution.

The tag line for the tournament reads “Heroes of Kalimpong, lest we forget” and we all stand by that as we can never forget these people who have given so much to Kalimpong by there sporting acheivements and made Kalimpong known to other people across the country.We saw photographs of so many great players of yesteryears at Mela Ground and probably we were all touched. They were the people whos foot-steps the present day footballers of Kalimpong are following. Though many us till today were not aware of them but through this tournament we have became aware how rich our town was with regards to the tradition of football and how many talented players Kalimpong had produced in its more than 100 years of Football History. We can’t help saluting all those players whos memories lives on till today.