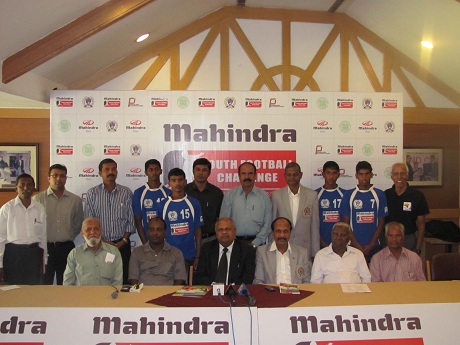 again have the honor of being one of the cities to kick off the second year’s intense footballing action from November, 2011.

The third Intra-City round, after Delhi and Kolkata, of this unique Under-14 Schools Football Tournament-cum-Talent Hunt will see 32 leading soccer playing schools from Bangalore competing amongst themselves to bag the honor of the “Champion School’ of Bangalore. The Bangalore champions will then lock horns with five other champion schools from Mumbai, Kolkata, Goa, Delhi and Kerala to decide the winner of the Mahindra Youth Football Challenge.

MYFC is the Mahindra Group’s commitment to promote football at the grassroots level. The company has partnered with Scottish football giants, Celtic Football Club, who will take on the responsibility of training and grooming young talent identified through the initiative. This year too MYFC has got on board 92.7 BIG FM, the country’s largest FM network with 45 radio stations across the country, as the official Radio Partner for this edition of the tournament.

Among the top 32 schools invited to participate in the championships are fancied names that include:

The inaugural Inter-City Challenge of the Mahindra Youth Football Challenge was won by Sukantanagar Vidyaniketan School, Kolkata, while Govt. Sports School, Bangalore finished runner-up.
Chance to learn from the best
The winning schools from the six cities and their coaches will benefit from a four-day coaching camp to be conducted by a panel of visiting coaches from the Celtic Football Club before the Inter-City Challenge. This same panel will then shortlist 24 players from the Inter-City Challenge who will further undergo an intensive five-day long coaching clinic where two to four of the best players will be picked to travel to Scotland and the Celtic Football Club for further intensive training.
Three footballers, Bishal Harizan and Jayanta Mondal from Kolkata and Mani Maran from Bangalore, emerged the best three footballers from the first season of the Mahindra Youth Football Challenge. After intense football action across six cities, involving 32 schools from each city, these three were picked after the Inter-City Challenge and got an opportunity to avail of a ten-day intensive coaching camp in Glasgow with the Celtic Football Club.
Bishal Harizan, Jayanta Mondal and Mani Maran spent fruitful days at Celtic FC, where they got an opportunity to watch a Scottish Premier League game at Celtic Park, involving Celtic FC and Motherwell FC and another at Ibrox Stadium featuring Celtic FC vs Glasgow Rangers. Their training there involved individual technique training, multiple sessions of Sports Science Testing, learning the right warm up techniques with the under-19 team, and daily coaching sessions with the Celtic Under-15 team. Bangalore’s Mani Maran was then selected to represent the Celtic FC Under-16 team to play against the Monash Football Club from Melbourne, Australia, capping a successful and satisfying experience for the three lads.
Peter Lawwell, Chief Executive of Celtic Football Club, had this to say about the three boys who were picked after the inaugural edition of the MYFC to travel to Glasgow and train at the Celtic Football Club Academy, “Celtic Football Club has been delighted with the progress made during the first year of the Mahindra Youth Football Challenge. The three players who visited the club’s academy in Scotland were a credit to all involved with the tournament and acquitted themselves excellently. We are looking further to developing this relationship further over the next 12 months and hope to play a substantial role in developing young football players across the country and ensuring a positive experience is had by all.”
Awards and accolades

There is plenty to play for in the Intra-City stage, with the winners from each city gaining Rs. 30,000, the runners-up team Rs. 20,000 and the 3rd placed winner Rs. 15,000. The teams that reach the last eight stages will be provided with kitting, while the winners and runners-up teams will be awarded trophies with each player from these teams getting a kit bag. Similarly, there will be a ‘Star Performer of the Game’ trophy for each match from the quarter-final stage and ‘Best Player of the Tournament’ Trophy to be won.
Going ahead, the champion school of the Mahindra Youth Football Challenge will receive a cash prize of Rs 50,000, along with the winner’s trophy, while the runner-up team will win a cash prize of Rs 30,000 and a trophy. There will also be awards such as Star Performer of the Game and individual appreciation trophies for the Best Striker, Best Mid-fielder, Best Defender and Best Goalkeeper.
Each player from the six teams in the Inter-City League will be given two pairs of kitting (Jersey, Shorts & Stockings), while travel, out of pocket expenses during the travel, and lodging & boarding of all the six schools will be taken care of by MYFC.