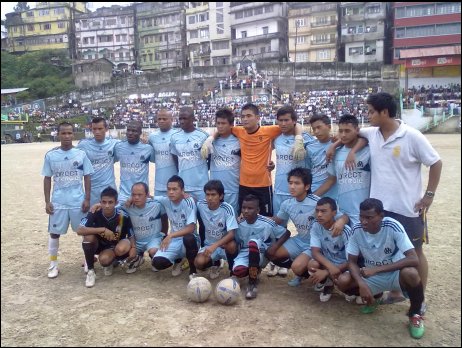 It’s been a very longtime since Kalimpong gave birth to a footballer of national repute. After Pem Dorjee and Jerry Basi the supply chain of players seemed to have dried up. There can be many factors for this, let me not get into that but focus on the positive side of Kalimpong football. The beautiful game thrives in this beautiful hill town and over two months of my stay here I have seen many talented young players. One of those is certain Asif Ahmed Ansari, a young and very talented goalkeeper. Asif was born and brought up in Kalimpong and used to love playing cricket when he was a kid. But one day at Mela ground this young boy suddenly turned into a footballer. Asif was playing cricket at the ground just beside a group of school level footballers. The coach was giving instructions to his goalkeepers about diving and at the very moment Asif who was fielding at point took a stunning catch diving full length towards his right. The football coach saw that and called him, Asif went towards him hesitantly the coach instructed him to stand in front of his goalkeepers took a ball and asked Asif to dive and catch it. Asif did what he was told to do and coach patted his back and told his goalkeepers that what they just saw was the perfect way to dive.

After that incident Asif slowly started lining towards football. Got into the school team and Asif the cricketer changed into Asif the footballer, He was in standard seven back then. Though he started playing football bit late, Asif proved to be a quick learner and adjusted to football in no time. Asif liked cricket but football was his calling and later on in life he found out that his grandfather, Badruddin Ahmed was also a very well known goalkeeper of the 1950’s and 60’s,who had even represented the Bhutan National team.He is proud of his Grandfather and is happy today that he choose football over cricket.

When Asif was in standard ten he got a wonderful opportunity as he was selected to attend Mohun Bagan Sail football Academy at Durgapur, but due to the board examination he had to return back to Kalimpong just in three months. Asif was disappointed but learned a lot during that period and also got the compliment which he remembers till date. The head coach at the Academy Jahar Das had told him that if he keeps working hard he will play for the national team one day. Those words still inspires Asif.

Asif also represented his school team, Scottish Universities Mission Institution (SUMI) in the BC Roy Trophy, premier School level tournament of West Bengal; winners of this tournament get direct entry into the Subrato Cup. For three consecutive years Asif went for the BC Roy trophy and in the last year he captained the team.

In the year 2007-08 Asif won consecutive player of the tournament award in the Inter School football tournament. After passing out of school in 2009 Asif started playing for the Kalimpong Football Academy team and his talent was quickly noticed by the Denzong Boys FC. He played for the team in the ONGC Cup which was held in Tripura and after three months Asif got an opportunity to play in the second division I-League qualifiers. He featured in the all the matches and gave some good performances but none of the Big Clubs noticed him so he had to return back to his home town but with age on his side Asif can go a long way.

After coming back to Kalimpong he joined a local team called Apex Football Club this year where most of his team-mates are his good friends. He has helped the team qualify for the finals of the Kalimpong league which is due to take place in a few days time and the 2nd of August Asif by his own admission lived the most memorable day of this life as Apex FC won the prestigious Sahid Cup Football tournament. This was for the first time in the history of this tournament a home side had ended up as winners. Asif had to take two trophies home as he was also awarded the player of the tournament award. He truly deserved that because he had made some outrageous saves in the three matches that the team played.

Asif harbors a dream of playing for one the Big Clubs of the country one day. At the same time he laments that there is no support system for the players in this part of the world but he remains positive and keeps working hard. Asif knows the road ahead is tough and there will be challenges but he believes in trying. So will Asif be able to fill that vacuum of Kalimpong not producing players of national repute? I say yes. Rest the time will tell.