One of the major reason why India is lagging in the world football map is lack of many quality football academies. Neither most of  the

clubs, nor the AIFF has taken much pain to develop a footballing institution that will give us our future heroes in football. However, there have been a few people who have taken painstaking effort to develop the infrastructure required to set up academies. Nirvan Shah is one of those crusaders. His Premier India Football Academy (PIFA) has gained accolades from AFC and FIFA in less than a decades time for the yeoman’s work he and his team has put in. I had the opportunity to interview him. Here are the excerpts-

Tell us about yourself and PIFA and how it came into existence.

My name is Nirvan Shah.
I have done my BTec in Business and Finance from UK after studying in Mumbai. I joined my family business which

was printing & plastic molding. However, my passion for football and dream to see India play a World Cup tournament directed me to do something fruitful with my life.
Every morning, I would take my son who was then 8 years old for school football training. Having seen the quality of coaching in UK, I was appalled by the quality and the method of coaching children which led me to understand why the standard of football in India is so poor.
To help me understand football even better, I did my FA 1, 2 And UEFA B coaching license in UK to better understand football coaching
Premier India Football Academy (PIFA) was started in 2003 with the sole intention of exposing the latest training methodology to Indian players and coaches through camps in Europe and India.

Your tagline is ‘to be the best, train with the best’. What are the features of PIFA which make it one of the best academies in India?

How much cost is involved in running such an extensive academy? What are your funding sources? How many coaches and staffs are involved and what is the capacity of the academy?

The cost of the academy is barely covered by the coaching fees. We have over 20 coaches training about 800 children every week.
The academy supports the PIFA Colaba FC teams that participate in various tournaments.

How supportive has been your wife Mrs. Anjali Shah?

Anjali has been equally involved in this academy, she handles the marketing & admin of the academy. 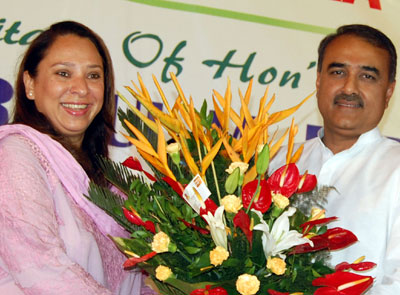 What are the main challenges faced in setting up such a quality academy in India?

The main challenge is the lack of infra structure to train.

Your team is playing in I League 2. How many of them are PIFA products? Have the foreigners added to the strength of the squad?

PIFA conducts a community project in Colaba, wherein we coach and develop talented players and absorb them into the various PIFA Colaba FC teams. This year we have qualified to play the I league 2nd division. Almost 70% of the players are PIFA & Colaba community products. The foreigners do add a little strength to the team in the form of skill and experience.

How hopeful are you about your chances for qualification in the I league? There are experienced teams like Techno Aryan and Vasco. Aryans have good record against the big three of Kolkata.

We have not had much time to prepare for this tournament. We played our last Elite division MDFA game on 18 December after which the main team was disbanded.
Even though we have drew with Mumbai FC in Mumbai league and will finish high up on the league table, we are participating in the I league to learn and benefit from the experience of playing a National league. Techno Aryans & Vasco are formidable teams and so are the rest of the teams in our group.

Mumbai has a huge cricket fan base. How much enthusiasm do you see in football? How did football become your passion?

Mumbai may have a huge cricket fan base, however more Mumbaites play football than cricket. Football is undoubtedly the favorite sport played by school children.
Football is a simple game. All players are involved in the game from start to finish and relies heavily on team work. There is a lot to learn from football. My passion for football started in school.

Women’s football in India is taking an upturn. Our vision is the same for the women as well. It just may be that the women will reach the World cup stage before the men do.
PIFA encourages girls to play football. Parents are advised on how safe it is for their daughters. It has a young women’s team that plays the Women’s division in the MDFA.

You have tie-ups with various international academies. How have they helped individually?

We have tied up with best academies that focus on youth development. PIFA gets access to their latest training techniques and

regimes. We then replicate these sessions in our academy training.
Last year, we took over a school training program. Within 2 to 4 months all the 5 teams of the school reached the quarter final rounds and these were teams that never went past the group stage. One girl and 2 boys from the school represented the state this year.
We conduct similar programs at all our centers. PIFA has been able to generate 5 national players and quite a few state players in the last 2 years.

Many young footballers contact us as they are lost about how to get into an academy and become a footballer. What is the selection process for PIFA?

PIFA believes that it is never too late to learn to play football. There is no selection process to train at the academy. However, we do have an age limit of 18 years.

Have the national and international scouts shown interests in PIFA graduates? Where are the players absorbed?

We showcased Kean Lewis (14) in UK at the Leicester City FC in 2005. After that we had a couple of more children that were sent for trials to UK & USA. Most of them got study scholarship and play football for the local clubs.

We are tied up with World class academies, FIFA agents and so when we spot a talented player we inform our counterparts, who then organize a trial.
Players also get a chance to showcase themselves at the camps we organize to UK, Italy, Spain as well as in India.

Who all are the most successful graduates from PIFA? Any awards and recognitions won by PIFA?

You were specially invited to FIFA headquarters in Zurich to meet Mr. Sepp Blatter. What came out of the discussion?

The discussion was India the sleeping giant. FIFA wants India to play the World Cup in the near future. Discussions were held on how it could be achieved. Lots of European clubs were looking at India but unfortunately they were only interested to increase the sales of their jerseys as mentioned by one of the dignitaries.
PIFA’s work in developing youth development was recognized and urged others in India to develop similar programs.

Indian Arrows is being nurtured by AIFF as a part of youth development. What are your thoughts about it?

It is a very good initiative to give a platform for these young boys to get the required experience. They are also being nurtured and developed by qualified and licensed coaches. The results will soon show.

Indian Football Network is an initiative taken by Indian football fans spread across India to help the game gain popularity in the country. What are your thoughts about it?

Indian Football Network is doing a great job in bringing us closer with other like minded people. It is the much needed catalyst for Indian football.