By Dean Nelson, New Delhi 1:41PM GMT 24 Feb 2011
Bob Houghton, the British manager of India’s national football team, could be sacked over allegations that he made racist remarks to 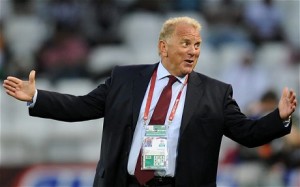 one of the country’s top referees.
Mr Houghton, who won admirers throughout the game when he took Swedish underdogs Malmo to the 1979 European Cup Final against Nottingham Forest, is accused of complaining about “bastard Indian referees” during an argument in October last year.
The All India Football Federation said its investigation had confirmed the allegations, which it has now referred to a lawyer to establish whether they are sufficient grounds to terminate his contract.
Kushal Das, the AIFF’s general secretary, told the Daily Telegraph the comments allegedly made by Mr Houghton were “purely a case of racial abuse” and that they could lead to a charge of “bringing the Federation into disrepute.”
Mr Das said Federation executives were also angry at Mr Houghton’s criticisms of Indian football facilities. He had said the national team is forced to train outside the country, India has only one proper stadium which is not used for football, and that it’s players are expected to play on surfaces “no self-respecting top player would play on.”

Mr Houghton has been manager of the Indian national team since 2006. His tenure has, until now, been regarded as successful. He won the Nehru Cup in 2007, the AFC Challenge Cup with a 4-1 victory over Tajikistan in 2008 and last year led India to qualify for the Asian Cup for the first time in 27 years.
But there has been resentment over his salary package – considered excessive in India, while low by English Premier League standards – and anger over public criticisms he made last month over the poor state of training facilities in India.
A statement by the All India Football Federation confirmed its executive committee had expressed it’s “unhappiness regarding the conduct and derogatory remarks made by Mr Bob Houghton.” “The Executive committee has unanimously decided to seek legal opinion regarding its course of action,” it said.
It is understood Mr Houghton, who was unavailable to answer questions, has not yet been given an opportunity to respond to the allegations