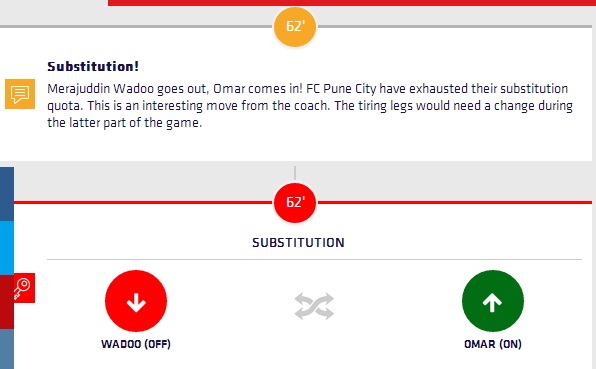 The Mumbai City FC vs FC Pune City game saw many ‘firsts’. The first ISL hattrick was scored by the Brazilian Moritz. This was also Mumbai’s first win in their first home game.  This was the first ISL game to witness 5 goals. Very interestingly, the game also saw, for the first time, 7 foreigners playing for the battered Pune side for the last 30 minutes of the game. Are 7 foreigners allowed? If so, when was the rule announced? If not, will the team be penalized?

The maximum number of foreigners that can feature in an ISL game has been a matter of debate since idea of ISL has been circulating within the media and fans. Initially it was decided that 4 foreigners can be allowed in the starting XI. Soon the organizers rightly concluded that if the level of the game needs to go high then we need more quality foreigners on the field. Thus it was decided that as many as 6 foreigners will be allowed in the starting XI, with the remaining 5 being Indians. IMG’s global football vice president, Andy Knee, had earlier said that the decision to field 5 Indian players and 6 foreign players is to create balance, which will lead to entertaining football. Surely, that will create entertaining football, but that does compromise the participation of Indians, and their subsequent development. Now with Pune’s 7 foreigner line up, one wonders whether the existing 6 foreigner rule is also malleable.

With 6 foreigners on field, Pune coach Franco Colomba made an interesting switch. Former Indian national Wadoo was taken off and his place was taken by Omar Rodriguez. Omar is  a Colombian, product of the Colombian club Millonarios.

It might have been a honest mistake as well. Franco Colomba was having a torrid time, with his team already 0-3 down at that the time of bringing Rodriguez. The change, in fact, did not bring any relief, as Pune conceded two more goals and Rodriguez earned a yellow card.

A similar mistake was done by Royal Wahingdoh in 2nd division I League in 2012. Royal Wahingdoh were contenders for getting promoted in 1st division I League, when they were not given any points for their 4-1 win against ONGC (who were awarded 3 points) as the Royals brought an extra foreigner during the final minutes of the game. Although Royals were comfortably winning, and that extra foreigner did not made any impact, the rules were followed and Wahingdoh failed to qualify for 1st division due to this mistake.

Will we see any action?

If this has been a mistake from Pune’s part, then clearly they need to be penalized. The professionalism which IMG-Reliance is claiming to instill in Indian football doesn’t allow such careless mistakes. Or will be see appeasement of the Pune owners ‘for the sake of entertaining football’? Will we see the typical ‘thoda adjust kar lijiye’ attitude again?

On the other hand, if the rules say that 6 foreigners can start, but during the game that number can be increased, then that needs to be clearly articulated and then we might see other teams doing the same, at the cost of Indian footballers.

If we can have 9 foreigners on field, the ISL organizers’ claims  of improving Indian footballers has no basis. A sane rule should allow a maximum of 6 foreigners at any time in the playing XI. 6 players anyways push Indian players in the minority, if this rule is also further abused then it will be really unfortunate for the local boys.

The author thanks Indian football forum member debarghya89 for bringing this anomaly to notice.

The screenshots showing the substitutions has been taken from the ISL official website as a proof of the changes made during the game.