D-Day had finally arrived! Indian football fans eagerly awaiting for “the birth of a footballing nation” were pleased that their wait came to an end finally.

The excitement had been building since August with ads such as “Let’s Football”, “Is Diwali, Football Wali” and many more campaigns. The excitement meant people flocked to the stadium to witness the quality foreigners exhibiting their skills in their own backyard. I, along with a few friends, also made the trip to the Vivekanada Yuvabharati Krirangan to watch Luis Garcia and company take on Mumbai City FC. However, that was not the only reason for which i had made the trip. The ulterior motive was to check out the reported new infrastructure development of VYBK.

By 4 PM most friends had gathered and together we made the journey inside. The first thing that came to our notice was that there was an increase in the number of gates that allowed entry of people (read 2 which remain closed during I-League or CFL matches).

There was also a marked difference in which the crowd was managed. The police were much more stern compared to a i-league match though as the match progressed we could feel that went down a few notch. On our way to the upper tier we came across a stench, about which I need not say any further.

Once we reached our seats, we noticed that the VYBK did undergo some renovation. The bucket seats were not the only thing that was installed. 8 digital screens were installed which meant for the first time the crowd could see replays of the important events.

It was not all rosy as Atletico De Kolkata also made some cosmetic changes with the banners to cover up the cracks. Although entire stadium had been cleaned for the event but by the end of the match there were tea cups and empty packets littered across the stadium. 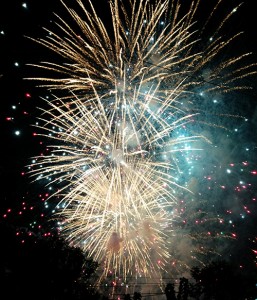 Inside the stadium, as time flew by, the opening ceremony finally started. West Bengal Chief Minister Mamata Banerjee began with a small speech and it ended with Mrs Nita Ambani, Chairperson IMG-Reliance. There was some dance events (Priyanka Chopra also did a few dance) in between the two speeches. The fireworks made sure it was a spectacle to behold. Such scenes were previously unheard of in a football match in India.

Finally it was the time for the match  but i assume everyone by now has read ample match reports. What i will do is comment on the atmosphere during the event.

The match kicked off amidst the “Kolkata Kolkata” chant from the crowd. During the initial 20 minutes every tackle, pass or shoot was cheered or jeered by the crowd. After which most fans had croaked voice but they didn’t let the atmosphere dampen.

As the half time approached guys started to look for drinking water. The attempts were futile as there was no one selling packaged water but there were counters that sold Pepsi at an exorbitant price.

As most fans failed to find any thing to sooth their voices, the chants had vanished during the initial minutes of 2nd half. The game also had a part to play in that in my opinion but things changed when the second goal went in thanks to wonderful strike from Borja Fernandes. The crowd then seemed to have found its voice back and went on to cheer for its team till the end. Sadly by the 85th minute the crowd begun their return journey.

The unavailability of transport was a factor behind the early return but i felt it was rather a lack of attachment to ATK as of now as a factor.

You might call me a traditionalist but few things that struck me odd was a lack of an announcer for the starting lineup. The continuous playing of let’s football and that heartbeat sound during the free kicks.

At the end of the day I applaud the efforts behind such an opening ceremony and a match. Next up Del Piero is in town and as the tagline suggests Let’s Football!