This is first of two part article on the protest in Brazil against the World Cup. The articles has been written by Duncan Crawley. The details of the author can be found at the end of the article. Click here for the second part.

We already have, what has quick become, an iconic image of where much of the feelings in Brazil rest at present. Brazilian artist Paulo Ito posted this mural on the doors of a schoolhouse in São Paulo’s Pompeia a few weeks ago.

Brazil is a huge country, twice the landmass of India, and it has made huge positive steps in recent years. It has both shocked the old guard and challenged old accepted views of what “development” means. Its economy has become very well respected, now the 5th largest on the planet, earning its letter “B” in the nicely named global economic block – BRICS. More importantly though, is how Brazil used its new found wealth. It chose to redistribute it more fairly, in an attempt to make a more just and inclusive society. There are not many other regions in the world who can claim to have lifted nearly 40 million people out of poverty in the same amount of time.

Also during these last few years, it seems the global tables have turned. Much of the “Old world” is now experiencing a terrible economic crisis and things in the land of the, not nearly as nicely named economic block – PIGS, seem to just go from bad to worse. I lived for 7 years in Barcelona, when I arrived the trend was Latinos coming to Europe to seek work and a better life. Now its the reverse, with a youth unemployment rate in Spain of nearly 60%, many Latinos are returning home and many Europeans have packed their bags and gone with them.

Back to Brazil today and the games

Despite the incredible amount of positive developments of recent years, the country has a long way to go. There is still a long journey to sort the old and nasty tensions: political corruption, crime, drugs, gangs, inequality, racism, lack of indigenous rights, deep class division and mistrust.

So, the cup is coming. But, have you heard that there has been much anger in Brazil over the last few months due to the arrival of the world’s greatest sporting event? Perhaps you have seen the massive protests that happened all over the country in June last year; from hundreds to thousands to millions in the streets, weeks of demonstrations, anger, confrontations with the police, overturned cars, buildings taken over, streets in flames… Also police baton charges, tear gas, rubber bullets, lots of injuries, even deaths. Nasty! We even saw the current Brazilian president, Dilma Rousseff, express support for the protests. She herself was a Marxist urban guerrilla who was imprisoned and tortured for protesting the military dictatorship (1967-1985). But, despite her support, her popularity rating has come crashing down, from 57% to 30%. 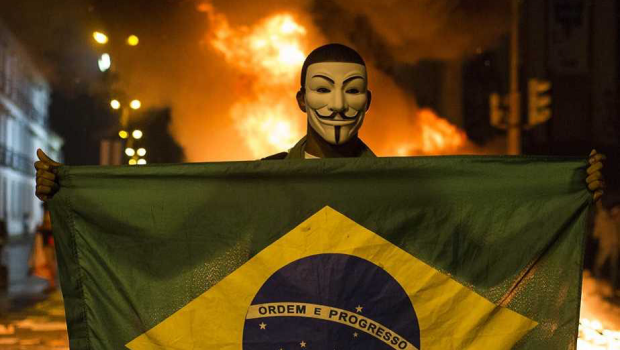 The important question is – Why all the anger? More and more people simply feel that FIFA are not arriving with their circus for the benefit of the normal people of the country, but for the 1% who will benefit massively from the games. People are angry that the government have paid out nearly twice the original bill, when the country desperately needs a decent infrastructure, schools, hospitals, a proper public transport system. It was actually a small rise in the cost of a transport ticket in Sao Paulo that sparked the massive protests last year. By the way, the people won that battle, the fare stayed the same, this is an important fact; Sometimes when you fight, you do win. There has also been global indignation at the horrific stories and images coming from the evictions of the favelas, the squatter communities that exist all over the country where the poorest of Brazil’s poor live. Lastly are the deeply disturbing images of what can only be described as ethnic cleansing of the poor by the infamous BOPE, the military police, in Rio.

It seems the majority of Brazilians don’t think that FIFA’s World Cup is here to improve the lives of ALL. In both the lead up to and during the cup, people will complain and protest. A big question is, once the cup starts, how big will the protests be? Brazil is a football mad country, many politicians hope that once the games start that locals will simply focus on how well the host country does. Many people are committed to using the protests to tell the world they are not happy and want proper change in the country. Some are even threatening to try to shut down the whole event, the twitter hashtag #NãoVaiTerCopa (There will not be a cup) covers that.

Sportswriter Dave Zirin, who wrote  “Brazil’s Dance with the Devil: The World Cup, the Olympics, and the Fight for Democracy”, recently outlined the heart of the problem –

“In a recent online poll in Brazil, only 22 percent of people in the country are even going to root for Brazil during the World Cup. I mean, the amount of dissatisfaction with what FIFA has done in conjunction with the Workers’ Party is reaching historic heights. The displacement, the debt, the militarization of public space—and yet this is the first time, really since 1968 Olympics in Mexico City, that you have seen mass demonstrations in advance of the event itself. And that’s what makes this historic, and that’s why the whole world is watching Brazil right now.

The problem is that first Lula and then Dilma told the country very explicitly that the World Cup was not just going to be a soccer tournament; it was going to walk hand in hand with even more developments, more money, more employment, more opportunity for people. And when folks see the gap between the promises for the World Cup and the actuality of what it’s bringing, and in the context of actually much smaller growth rates in the country than existed even three years ago, that’s what’s really fueling a great deal of the discontent, because when you see a stadium being built for $500 million, and there’s no food on the table, there’s no healthcare, and education has gotten, by many measures, worse, then it breeds the kind of anger that you’re seeing right now.

The Workers’ Party is using both carrots and sticks as a way to quell the protests in advance. Like, they are telling the folks in both the homeless and Landless Workers’ Movements—they’re the folks doing the occupation next to the stadium—that they’ll talk to them about maybe using that empty lot to build more public housing, while at the same time also sending in the police with the rubber bullets, with the tear gas, and also trying to pass legislation to make demonstrating a crime akin to terrorism.”

Possibly the greatest footballer of all time, Pelé, is even quoted as saying:

“It’s clear that politically speaking, the money spent to build the stadiums was a lot, and in some cases was more than it should have been. … Some of this money could have been invested in schools, in hospitals. … Brazil needs it. That’s clear.”

Cost of the World Cup

Organizing this sporting event in Brazil has impacted and will further impact Brazil hugely in social, economic and environmental aspects. Several protest groups are trying to minimize the negative impact, while aiming to utilize this platform to promote positive changes. In the second part of the article, the more constructive aims of the protest groups would be explained. 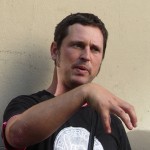 Duncan Crawley is an architect who is deeply involved in environmental and social movements. He focuses on urban ecology, open creative systems, bikes, gardens & fun. Although from Ireland, he is currently residing in Curitiba, Brazil. He has also worked and resided in England and Barcelona.