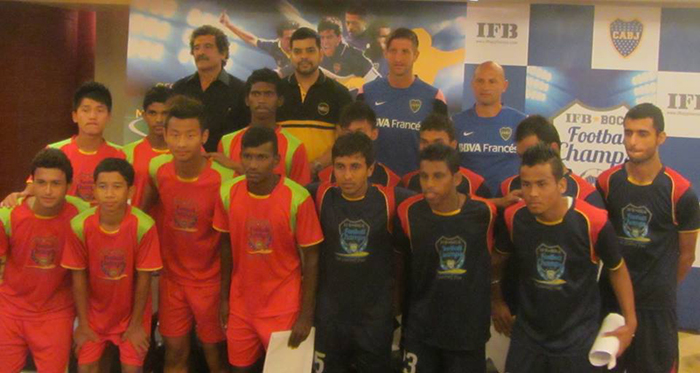 While The IFB Boca Juniors Football Champ program was launched, hardly any person thought of it. As days passed, grueling football continued to be played among schools & colleges all over the India, students erupted in joy as well as succumbed to deep pain. Eventually 8 schools & colleges reached to the All India Final which was staged at Cuncolim Stadium, Goa. Stage was all set, just the ball game awaited us. After two days of some picturesque tense football showdown, Khalsa College, Chandigarh and Malabar Special Police Higher Secondary School, Mallapuram emerged as the All India Champions.

After rigorous football sessions spanning 7 days, 16 of the 30 boys were chosen by coaches who would find their dream comes true as they would visit Boca Juniors FC shortly. High Life Management Pvt. Ltd., a front-runner Sports Management Company based in Kolkata, orchestrated the mammoth extravaganza which ran through almost six months. Jamshid Nassiri, the man who needs no introduction for Indian football lovers, is an instrumental part of High Life Management Pvt. Ltd. and he only picked those students who would master Indian football in coming future.

Meanwhile, Mr. Nassiri, Mr. Blasco and Mr. Estevez announced those 16 names yesterday to a packed press conference and had a brief interaction with Media regarding India’s future in Football, how these youngsters could be trained for their football future etc.

What have you observed over the period during which the kids have trained under you? Where do you think Indian Football is heading with the current situation in hand?

Jamshed Nassiri: The situation now is we need proper academies for sure, otherwise football in India will never benefit. Now 13 teams are playing in the I-league, if we have as many football academies across India contributing to youth development for various age groups, say from 10 to 18, only then India stands to go one step up. We must concentrate on doing so for the next 10-15 years like it has been running in other developed football countries. These lads are really talented, but they must be taken care of. We need to pull up our socks and raise these talents who would shine in near future, big time.

Alejandro Javier Blasco: Definitely Indian Football needs proper guidance and coaching. The youngsters might feel confused and lose the focus midway without any professional coaching. We can’t afford to lose those talents in such way. There is abundance of talents who needs proper pushing.

What was your take before coming down to India?

Alejandro Javier Blasco: When we arrived, we had many doubts about the levels of players but we are very pleased with the results and have seen the efforts the boys have put in. The players can work more on their individual techniques, tactics, strategy and strength. We are sure that the selected players who will travel to Argentina are prepared to face the next challenge.

How are you feeling now after spending almost a week with Indian young footballers in Goa?

Alberto Jose Estevez: We had really little idea of Indian Football and the system as a whole. But, while we are leaving after 7-8 days, we are doing it with a heavy heart. The supports staffs coordinated well and they have been very jovial with us, which eased our job from day one itself.

Alejandro Javier Blasco: Goa is a nice place. We roamed around a few places and had a little outing over the city. I am really thrilled about Indian football and Goa, one of the football crazy towns. The kids have really pushed themselves out of their skin to showcase their talent.

How many of the boys have been selected?

Alberto Jose Estevez: Sixteen in total. Whole the bunch was splendid indeed. Sadly, we were bound by our terms only while choosing the guys who would fly to Buenos Aires. They would definitely face newer and fresher challenges there as well as they would hone on their own credibility in a different atmosphere. 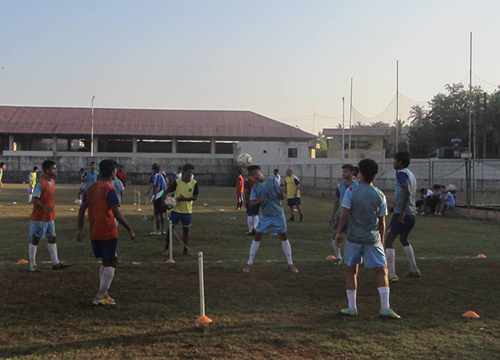 Did you find any unparalleled talent who could feature in Indian National team in future?

Jamshid Nassiri: Yes, of course. Each of those 30 has the potential to don the national jersey. Only they need proper guidance, both on & off the field. We have a serious task ahead to nurture those young talents.

Alejandro Javier Blasco: Really we have an challenging task ahead to train those prodigies so that they could attain the next level. India is blessed with good raw talents; just lack of proper training is barring them to flourish. Our endeavor is to keep them on right track to hit the bull’s eye.

Are there any particular city lads who prevailed over the others in the selection process?

Alberto Jose Estevez: Not really. In School segment, we have a single guy each from Delhi, Kolkata, Shillong, Pune, Goa, Bangalore and Calicut. In college section, 1 guy from Chandigarh, Goa, Calicut got selected whereas 2 boys got the nod from Kolkata and Shillong each. This shows the versatility of talents all over the country. Whole the country is thriving towards a better football future, which is really a good sign.