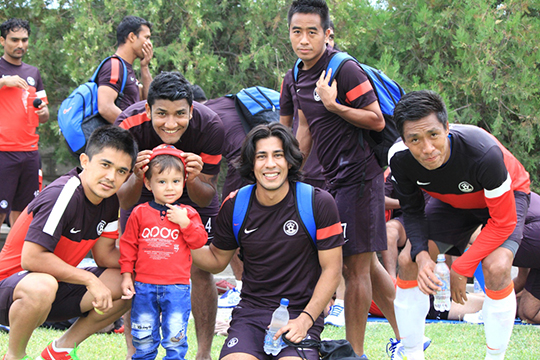 Indian football team is currently in Khujand, Tajikistan for a FIFA international friendly on 14th August, 2013. Indian players are preparing for the upcoming SAFF Championship and would want to make the most out of this friendly. Indian Football Network analyses the factors which would work against the Blue Tigers. Koevermans’ boys certainly need to overcome these factors if they want to comeback with a good result.

India’s away form has been woeful in last few years. Since 2010, India has played 22 international away matches, losing 18 times, drawing twice and managing to win only against teams like Pakistan, Chinese Taipei (twice) and Guam. In these 22 matches, India scored 19 goals and conceded a humiliating 44 goals. The statistics clearly show that India have not been at their best while playing ‘away’ games and this heavily puts odds against India.

Both India and Tajikistan are coming from pre-season and thus, the players would be lacking enough match practice. However, Tajikistan had started their training camp from 17th July,  with a break in between. Only some of the I League clubs had started their pre-season training and Wim Koevermans had hardly ten days to work with them. Koevermans also indicated that fitness levels of some of the players didn’t allow him to select them. Overall, Tajikistan looks a better prepared team for this game.

Koevermans has left out few big names like Subrata Paul, Rahim Nabi and included a few new or inexperienced names. Koevermans would be using players like Arnab Mondal, Sandesh Jhingan, Lalrindika Ralte, Shylo Malsawmtluanga, Dawson Fernandes for the first time, and thus, it will be a challenge for him to get the team gel together in a shirt time. Players like Raju Gaikwad, Robin Singh, Jewel Raja, who are in the squad but had limited opportunities last season would also be a problem area for Koevermans.

India’s forward line is heavily dependent on Sunil Chhetri. Apart from Sunil, Koevermans have chosen Robin Singh, who didn’t feature much for East Bengal last season, and Dawson Fernandes, who had a good season but has no international experience. The new breed of attacking midfielders like Vineeth and Alwyn are also missing, so can feed the striker(s). Attacking midfielder, Jewel, had a forgettable season, being benched mostly towards the end, Arata and Malsawmtluanga has very limited international experience,  and thus, players like Francis, Miranda and Lalrindika had to take the responsibility to compensate for the lack of firepower.

The event of this friendly is the celebration of Tajikistan’s independence. Motivation among the players would be high as they won’t want to lose a game, at home, on their independence day. It is expected that around 25000 people will come to watch their team. The hostile crowd would further make India’s task difficult and would motivate the home team.

Overall, it seems that India would have to a fight hard to get a respectable result. Multiple factors are working against the Blue Tigers and they need to rise to the occasion to prove themselves and to erase the memories of AFC Challenge qualifiers shock defeat.