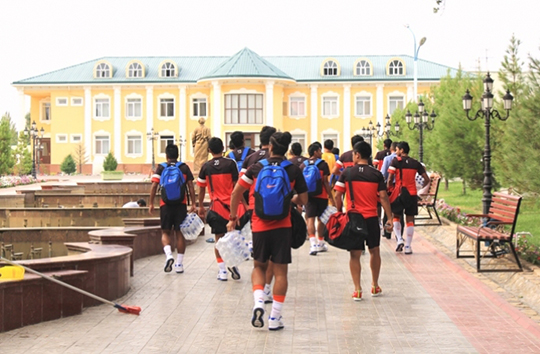 Khujand is serene. Once a part of unified Soviet Russia, you just cannot miss the Russian architecture, the sprawling gardens, the greenery. Add to it the penchant for sports for all, Khujand is indeed special.

Early morning, all from 8 to 80 are heading for either the Swimming Pool or the Tennis Courts or the Football Fields or elsewhere. But mind you, only for sporting activities and nothing else. Ten-year old kids splashing in the Pool stay your wake-up call.

The Team Hotel of the Indian football team is a mini City in itself. The Hotel premises, around 20km from the City Centre, hosts Service Apartments, Restaurants, Bars, a Sports Complex, an Ampitheatre, two Football Fields and even a Nightclub which obviously stays a taboo for the Team India squad.

There’s more. There’s an artificial Sea Beach within the Hotel Premises and on one side, the river flows.

The ground on which Team India has been training stays barely 500ms away from the Hotel Building. It’s just a five-minute walk.

Among the locals, there’s always a buzz as and when Team India Players of Staff pass by. Not all speak English but communicate through sign language. “Hindustan,” is all what they can pronounce along with names of all leading Bollywood actors.

On arrival in Dushanbe, the Capital City of Tajikistan, the Team Manager of the Tajikistan National Football Team stayed busy mimicking dance steps of ‘Disco Dancer’ Mithun Chakraborty. ‘I’m a Disco Dancer…’ he hummed the unmistakable tune along with the steps. You looked around and gauged other locals at the Airport were enjoying it thoroughly.

Even the local Team Manager, Aziz, stays in awe of ‘Jimmy.’

And there’s Maxim, a cute three-year old who visits the Training Sessions every day. In fact, he waits for it to end and then the ground becomes his territory. He walks up to everyone, shakes hands and even sits on Wim Koevermans’ lap.

Willing to share his Bubblegum, Maxim stays possessive of his hat, something which he won’t share with any. And he loves posing for pictures.

“He has been after me to bring him to the Practice Session. He likes the Indian Players very much,” his dad, quite surprisingly, speaks fluently in English.

Apart from the father-son duo there are other locals too who have now become regulars during practice – schoolgirls, ladies, executives, elderly couples. They clap when there’s either a defence splitting pass or a tackle or a header or a goal. From a distance you just miss their animated discussion.

Almost all of them are expected to be at the 20 Years of Independence Stadium on Wednesday when Tajikistan host India. “We expect 25000 people on the ground on that day,” Aziz informs.