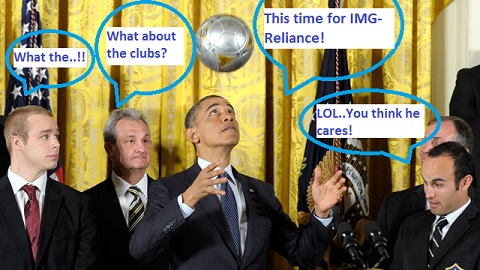 IMG-Reliance, who have been secretive about their plans on the new IPL-style Indian football league, have revealed that they will reveal the plans only to Barack Obama before going ahead with the new league.

The IMG-R have been heavily influenced by the 65 Indian MPs who recently approached the president of the USA regarding Narendra Modi and are ready to follow the same suit.

We initially thought of approaching Mr. Manmohan Singh but when we saw that the ministers themselves are queuing up for Obama, we thought why should we go to the PM. Additionally, Obama speaks!

The IMG-R have been denying meeting the clubs to discuss their plan of action regarding the new league which had kept them in the dark. It is apprehended that the new league may overshadow the current one leaving the traditional football clubs in the lurch.

On being informed about the involvement of Obama in the matter, the Indian Football Clubs’ Association (IFCA) member Mr. Deepak Manna was visibly distressed and said he will do everything to stop IMG-R officials from visiting the USA.

We will immediately write to Obama seeking the denial of US visa to any IMG-R official on the grounds of mass murdering the football clubs.

Our sources in the White House revealed that president Obama is seriously considering the proposal.

I am considering the IMG-R proposal. We are investigating whether it has any potential to disturb the world peace and harm the democracy.