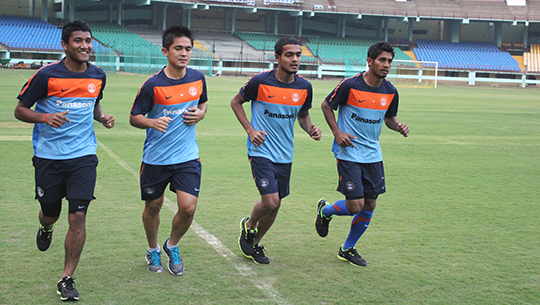 Among others, Sandip Nandy, Lenny Rodrigues, Denzil Franco, Nirmal Chhetri and Jewel Raja also arrived as did Assistant Coach Savio Medeira and the support staff. The remaining members of the squad will be joining the team on Sunday (February 3).

Chhetri, Nabi, Jewel and Nirmal Chhetri were even part of a limbering session at the majestic Nehru Stadium late afternoon.

“It’s a wonderful feeling for any Coach to see his boys assembling again. They head into Kochi straight from the I-League and we intend to make use of the next few days ahead of our match against Palestine,” Koevermans said.

Chhetri who landed in New Delhi on Friday afternoon from Portugal looked fresh despite having travelled “almost half of the World” in the last 24 hours.

“I’m back in my country and this time I’m in ‘God’s Own Country’,” he smiled as he referred to Kerala. “The State has a huge fan following for the sport and has produced so many wonderful players over the years.” he uttered. “I expect a huge football loving crowd cheering us against Palestine on the 6th.”

“It’s exciting to meet my teammates once again. Obviously we cross our paths in the I-League every week but the National Camp is above everything,” Nabi maintained. “Expectations run high after our Nehru Cup triumph and we are looking forward for the match against Palestine,” he added. “And you only get to meet Sunil in the National Camp,” he joked as everyone burst into a hearty laugh.

Goalkeeper Sandip Nandy, who has been summoned for the Friendly said “the call has served as the biggest motivation for him.”

“This is perhaps the biggest motivation a player can ever ask for. I had been working hard and will be working harder from now on. I had never lost my self belief and it’s heartening that good performances are being rewarded. I need to thank Koevermans for that,” he opined.

The practice session on Sunday (February 3) will kick-off at the Nehru Stadium at 5pm.