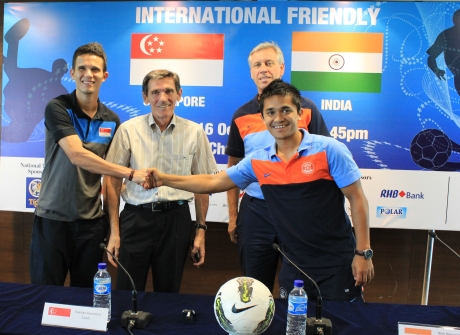 “India played in the Asian Cup in Doha and had some good matches. There are six players of that team who are in Singapore for the International Friendly. We need to stop them,” he added.

“Most importantly, we need to stop that guy,” Avramovic pointed to Chhetri. “We can’t afford to give him space.”

“This match stays important for us as we will be using this as a platform to prepare for the Suzuki Cup,” he added.

“It’s nice to get to play a match on a FIFA date. We look to improve ourselves and are looking forward to a good match. It will be a difficult one,” Koevermans opined.

“We have had a look at Singapore in a video session. They have the home advantage. But we play every game intending to win it and we will want to win this too. But as I said, it’s not easy,” Koevermans maintained.

“We are excited to come here and play. Our last Tournament was a memorable one. But that’s past. Now it’s up to us to take up the challenge,” Captain Chhetri quipped.

re looking forward to the game. We are ready for it.”

Koevermans lauded the spirit in the team. “Our main aim stays to

qualify for the 2015 Asian Cup. We need to move ahead,” he commented.

“We are moving in the right direction. We should take it step by step and aim to reach among the top 10 in Asia and move on from there. There’s a certain plan laid down by All India Football Federation and we have Great Coach in Wim. Obviously, being the top 10 in Asia is not easy but it’s achievable and I’m optimistic,” Chhetri who plays for Sporting Lisbon in Portugal, said.

There are quite a few Naturalised players who have donned the Singapore National Team colours. “There are people from all Nationalities staying in Singapore. They are locals who are citizens of Singapore,” Avramovic informed. An Australian, two Chinese, two Serbians and a player of African origin are up for selection for Tuesday’s (October 16) International Friendly.

“We need to create chances and we will,” Avramovic went on. “We will speak about that after tomorrow’s match,” he signed off.