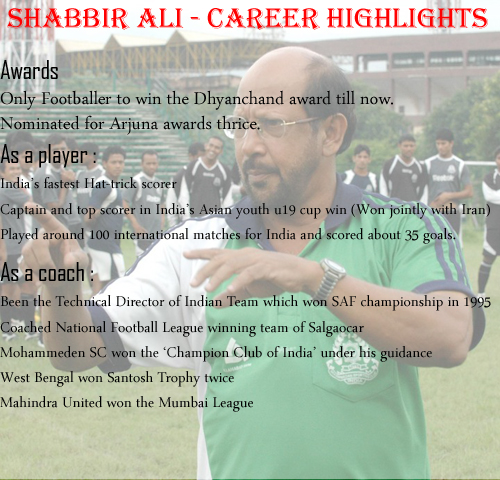 We all know the saying ‘Hard work always pays’. However, very few Indian footballers embody the statement as well as Shabbir Ali. Shabbir Ali had a fantastic career, both as a footballer and a coach, however, for a long time, neither his achievements were rewarded suitably (in form of prestigious awards)  nor was he media hyped. But then, ‘Hard work always pays’, maybe a little late! Shabbir Ali never gave up, he kept up his good work as a coach, and eventually in 2011 he won the prestigious Dhyan Chand Award, India’s highest lifetime achievement award in sports and games. He has the distinction of being the only footballer till now to receive this award.

Let’s take a look at the life and achievements of one of the most successful strikers and coach in Indian football history.

Shabbir Ali spent his childhood days in Hyderabad. Unlike now, those days Hyderabad used to have a good ‘football culture’. Shabbir Ali was from a ‘non-sports’ background and thus initially his dreams of being a footballer were not encouraged by his family. He kept working hard and his dreams later found acceptance and encouragement in his family. He started his journey from Abbas Union FC, Darushifa, Hyderabad, a club where he is currently the president. His club debut came when he was only 10! He then represented his school teams, Aliya High School (1967-68) and City High School (1969), in Subroto Cup which is India’s most important inter school football tournament. His talent was soon spotted and he was quickly drafted in the Indian youth squad. In 1974, he captained Indian team in the Asian youth u19 cup. His 5 goals in the tournament (out of 9 from Indian team), helped India to emerge as the joint winners along with Iran. This win probably remains India’s last trophy in a tournament of such a scale at Asian level.

Shabbir Ali played for couple of more clubs in Andhra Pradesh and then moved to Bombay (now called Mumbai) in the early 70s. In Bombay, he joined Tata Sports Club, one of the top clubs in Bombay those days. He played there for 5 years and during this time he got selected for Indian senior team in 1974. From Bombay, he next came to Calcutta (now called Kolkata) where he joined East Bengal. However, most of his success came when he joined Mohammedan Sporting Club, where he spent 7 years in the 80s. In fact, Mohammedan SC enjoyed one of their most successful phases during this period. During his captaincy, in 1983-84, the club won 9 trophies including back to back wins in Federation Cup. Later in his playing days, he also went to Bangladesh to play for Dhaka Victoria Sports, where he stayed for a short while.

Shabbir Ali represented Indian team till 1984, where he played about 100 matches and scored around 35 goals. He has the distinction of scoring the fastest hat-trick by an Indian, when he scored 3 times within 30 minutes against Indonesia in 1976 Merdeka Cup. He had captained India few times in early 80s. He has also represented 3 states – Andhra Pradesh, Maharashtra and West Bengal.

Although Shabbir Ali’s achievement speaks volumes about his prowess as a player, strangely he never received the Arjuna award although he was nominated thrice.

Shabbir Ali remains one of the few footballers who had tasted success both as a player and a coach. He got his Diploma in football coaching from SAL in 1988-89 and then got Trainer B License from German FA (1990). He also was Jozsef Gelei’s assistant coach for a month, who was the Indian national team coach during 1990-91. His coaching career started with a bang! With Mohammedan SC (1990-91), he won many trophies – Bordoloi Trophy, Kalinga Cup, Nagjee Trophy & Stafford Cup. Furthermore, they were runners-up in Rovers Cup and Governor’s Cup. In their course to glory, they defeated teams like Mohun Bagan, East Bengal, Abhani (Bangladesh), India u-23 team. Eventually, Mohammedan SC became the ‘champion club of India’ in that season (Those days, this was decided by total points collected from various tournaments won). Then he went on to coach other Calcutta clubs – Rajasthan Club and Peerless SC. Under his guidance, Peerless SC qualified from “A” Group to “Super Division” in IFA league 1993-94. In 1995-96, he held the post of Indian National Team’s Technical director during which India won the gold medal in SAF championship after a gap of 3 years. One of his biggest achievements came when he coached Goa club, Salgaocar. During his reign, Salgaocar won the National Football League (1998-99) becoming the first club from Goa to do so. They followed the NFL victory with winning the Rovers Cup, Durand Cup (first Goan team to do so) and Super Cup. In the same year, he was appointed as Goa’s Santosh trophy coach where they emerged as the Runners-up. In 2000-01, he coached Mahindra United, where he won the Mumbai League and were runners-up in Durand cup. In 2001-02, he came back to Kolkata to coach relatively smaller club Bharati Sangha, who came 3rd in the IFA league. From then he has coached many clubs like – Fransa-Pax FC, Churchill Brothers, ITI, and had another stint with Salgaocar and Mohammedan SC.  Among these his most notable achievements are – promoting Fransa-Pax FC and Mohammedan SC to National Football League (Now called I league) from 2nd Division. Still he has limited success during this phase, changing clubs bit too frequently. However, glory days returned for Shabbir Ali when he guided Bengal team to Santosh trophy victory in 2010. The victory was special because the trophy came to Bengal after a long wait of 11 years. He proved his consistency by defending the title successfully in 2011.

Innovations as a coach

Very early in his coaching career, during his Mohammedan SC days he experimented with the 3-5-2 formation. This formation was not played by Indian coaches those days. Shabbir Ali was exposed to this system when he was assisting Jozsef Gelei. He also used this system while coaching Peerless SC (1993-94) & Mahindra United (2000-01). This system was most successful with Salgaocar when they won NFL, Rovers Cup, Durand Cup and Super Cup (Twice). He was not afraid of experimentation. During his Salgaocar days, he used Augustine Rodrigues, a striker, as an overlapping right winger/back (in the 3-5-2 system). Augustine did well, scored a few goals and had a fantastic season. However, like any good coach, Shabbir Ali is not stuck to a rigid system. During his back to back Santosh trophy wins with Bengal team, he used the more conventional 4-4-2 system.

Shabbir Ali has been roped in by many sports channels as a football analyst. He has covered FIFA World Cup 2006, 2010; European Championships, I league, Federation Cup, Indian team friendlies for channels like ESPN, Star Sports, Ten Sports, Zee Sports, DD Sports and many more national and local channels. In 1994, he was selected by West Bengal govt. to observe the World Cup in USA.

Setbacks and overcoming them 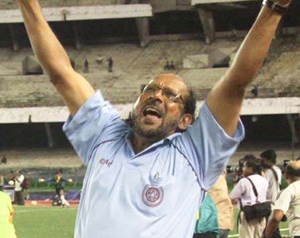 Every sportsman suffers setbacks, but what sets apart men from the boys is their ability to overcome them. Shabbir Ali belongs to that league. When he first moved to Calcutta to join East Bengal, he got caught in club transfer issues and was not allowed to play. Many others players also faced the same and left Calcutta, however, Shabbir Ali stayed back. He kept practicing, worked in a bank, and proved himself later whenever he got chance to play. When he was playing for India and scored hat-trick against Indonesia (in Kuala Lumpur) within 35 minutes, he was surprisingly taken off after the half time. It was rumored that it was not coach’s decision but the instruction came from embassy! Again, when all Indian captains were invited to Durand Cup’s 100 yrs (1988) or in Nehru Cup (1989), he was ignored although he has also led India few times. All these didn’t turn him away from serving Indian football.

During his coaching career, after he had a dream season with Mohammedan SC (1990-91), he was sacked from the position by the club authorities in 1991, a month before his contact has finished. However, he continued his rise as a coach, first by coaching smaller clubs and then clubs in NFL, eventually giving Goa club Salgaocar its first NFL win. During 2003-05, he had to changed clubs thrice, Fransa-Pax FC, Churchill Brothers, Salgaocar. In Fransa, he run into trouble with the management and staff; then in Churchill, the team’s performance was poor and his wife was seriously ill, he decided to resign from his position. His resignation brought criticisms about him being unprofessional and leaving a club in mid-season. However, he had left the club only after ensuring that they have back backup coach. His second stint with Salgaocar was also not fruitful. His later stint with Mohammedan SC also was bitter with problems with the management and eventual relegation of the club. This was a phase when Shabbir Ali – the coach, was written off. When he became Bengal’s coach, not much was expected from him. But like a true hero, he overcame all the odds and ended Bengal’s Santosh trophy drought.

It was the same story for the awards too. His records speak for themselves but still he never got Arjuna award, although he was nominated thrice. He was also nominated for Dhyan Chand award before, eventually he got it in 2011.

Football lovers will hope to see more from him, although he has nothing more to prove. He has been a top striker for India & his clubs and now he continues to serve Indian football as respected coach and football analyst.