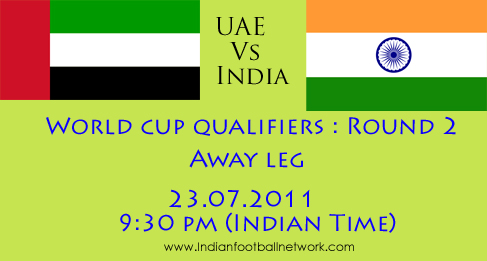 A spirited team India, fresh from their victory over Qatar at Doha, are upbeat about the fixture tonight. India are taking on the experienced and strong side of UAE in their Away leg today.

Both the teams have had their preparations and can take heart from how they have performed post Asia Cup. India played 5 games since Asia Cup in Doha in January and have remained unbeaten. 3 of those 5 games were part of the AFC Challenge Cup 2012 Qualifiers. After a long training camp, the new look India played 2 friendly matches in the run up to this match. Playing according to Armando’s possession football mantra, the Blue Tigers gave a great account of themselves against Maldives. Although the result read 1-1, India created a lot of chances in the game.

The greatest moment of the decade for Indian fans came when India beat mighty Qatar in an International Friendly in Doha. But unfortunately, the fans were deprived from witnessing the historic moment. There was a telecast scheduled by Ten Action but it got canceled due to some issues.

But this time, Ten Action brings us all UAE vs India Live! It will be also telecast on Bengali channel 24 Ghanta. But we know there are many people who do not get access to these two channels.

So India’s Football Forum will have all the Indian Football Fans converging together to discuss the match LIVE.

CLICK HERE for many more links for live stream!

The following live stream links might also be useful

Cheer for your team. Cheer for the Blue Tigers!