Margao: Churchill Brothers, looking to win the I-League title for the second time, has appointed Croatian Drago Mamic as their new coach after Vincent Subramaniam resigned from the post couple of weeks ago. 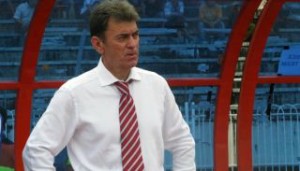 Drago, who has a rich experience of coaching in Myanmar, China, Malaysia and Croatia, has a tough job at hand to guide Churchill to their second I-League title.

Presently, Churchill Brothers are placed second, four points behind Salgaocar, and Drago will have to use all his experience to guide the team to win the title as they still have eight matches to play.

Churchill Alemao, the patron of the club, made it clear to the coach that he would settle for nothing less than the title. “We have won the title just once and finished runners-up in the league a record four times but we don’t play to finish second, Give me the title,” Alemao is learnt to have told the coach.

Mamic, who arrived here on Saturday, was happy to see the league fixture and promised Alemao that he would do his best to guide Churchill Brothers to their second title.

“We need Salgaocar to slip a bit and hand us the chance to overcome them as we have a match in hand to play against them,” stated the UEFA Pro Licence holder. Drago was assistant coach to Croatia national team in the 1990s for five year. In 2000, he moved to China where in his first year he guided Quanxing SC to the third spot. He was immediately snapped up by China’s leading club Dalian Shide FC and he guided the club to Chinese Super Division League title.

Drago then moved to Malaysia with Sabah FC and then to NK Orijent in the Croatian First Division League.