1979 born Liberian footballer Johnny Menyongar who has spent considerable time playing professional soccer in the U.S., will not return to the NSC Minnesota Stars this season and has instead signed a new contract with United Sikkim Sports Club. Menyongar 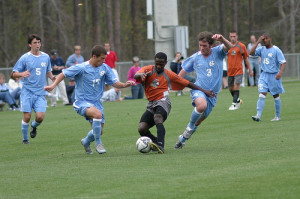 The 32-year-old Liberian international has made 314 appearances scoring 85 goals while playing in division 2 pro soccer with the Minnesota Thunder, Rochester Rhinos and last year the NSC Minnesota Stars. He also made 38 appearances for the Liberian National Team and is tied for the all-time goal scoring leader in U.S. Open Cup play in the modern era with 13 goals.

Menyongar has already arrived in India and is training with United Sikkim Sports Club. This newly formed club was founded by the most famous footballer of all time in India, Bhaichung Bhutia. Menyongar was recruited by Bhutia himself. The club is taking part in I-League 2 and is hoping for promotion to the I-League for the 2011/12 season which runs at different times of the year. Menyongar’s contract only runs through June of 2011 but an extension is expected if the team is promoted to the first division.

“There is lot of talent in the northeast [India] and we have to give them proper direction,” said Bhutia. “I hope United Sikkim can serve the purpose. We will have an excellent youth academy in association with former Portugal coach Carlos Queiroz. In next 4-5 years we will be among the best in the country. We have full support from the state government and we will build a world class stadium and an academy.”
According to an article published last December, the club is also being backed by the Sikkim Government and Bhutia has applied for 30 acres of land from the state government.

I-League 2 will have 21 teams participating in the second division preliminary round matches set to start action in the middle of March. Only 2 teams will be promoted to the I-League. The I-league runs from December to May.