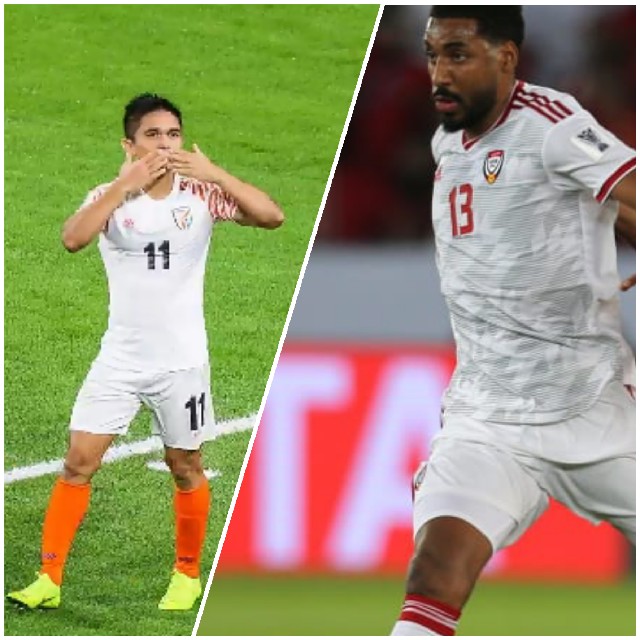 India take on hosts UAE in their second game of 2019 AFC Asian Cup in Abu Dhabi on Thursday. The Blue Tigers won their opening game 4-1 against Thailand and are likely through to the knockouts, while UAE escaped with a draw against Bahrain after they were gifted a generous penalty.

UAE would come with all guns blazing against India after failing to win against Bahrain. The hosts are already under pressure from media and fans after an underwhelming start to their campaign and anything short of a win will put their hopes of qualifying to next round in trouble.

Stephen Constantine and his men will be full of confidence after their historic win against Thailand but won’t be carried away by the result ahead of their clash against the hosts.

Speaking ahead of the game against UAE Sunil Chhetri said “We have to focus on match against hosts UAE. It will be a very difficult game. If you ask me — without taking anything from Thailand, the least difficult one among the three matches was against Thailand.The most difficult game one will be against the UAE and lest we forget, Bahrain will be equally tough for us. We are concentrating on the next one now and we need to give a good account of ourselves.

Chhetri who has four goals in the Asian Cup knows what it is like to score against a top country, the forward already has goals against South Korea and Bahrain and his performance would be key for India to take a result from this encounter.

Stephen Constantine has already orchestrated some great results against stronger sides and going against a team like UAE who are direct and predictable in their attack we can expect him to get another good result for the Blue Tigers.

UAE are under immense pressure after their game against Bahrain and Blue Tigers might be facing at the worst possible time. They are managed by Alberto Zaccheroni who has won the Serie A with A.C Milan and Asian Cup with Japan and has over 35 years of experience, He is certainly someone who knows to change things around.

Fares Juma, defender of the UAE said “All the focus is currently on the game against the Indian team on Thursday, stressing that everyone is fully aware of the importance of the confrontation and difficulty, and the need to win to enhance the fortunes of the whites to continue the championship”.

India will play their usual 4-4-1-1 formation which Stephan Constantine has used in every game since he took over as manager back in 2015. Ashique Kurniyan is expected to keep his place in the team after an amazing performance against Thailand.

India will be more cautious in their approach against UAE compared to their previous games against Thailand. The Blue Tigers will defend more deeper play and try to break on the counter-attack with fast forwards like Nazary, Udanta,Ashique and Chhetri.

UAE will play a typical 4-2-3-1 formation they will be direct in their approach and will try to exploit India with their physicality. They are expected to have most of the possession and it will be essential for India to prevent them from getting crosses into the box.

Pronoy Halder  – Halder is often regarded as India’s best Defensive Midfielder. With India facing a very strong opposition a lot will depend on him to win balls in the midfield and break attacks.

Ali Mabkhout – He is probably one of best strikers in west Asia and has amazing goal returns for both club and country( 0.75 per game for club and 0.68 for country). Mabkhout had a bad game against Bahrain but will look for redemption against India.

Ismail Al Hammadi – He has been a key member of the UAE side for over 10 years and has scored against India in 2011. He is a traditional winger and is known for his crosses inside the box.

India and UAE have played each other 13 times over the history and UAE have won 8 of those games. India have only 2 wins against UAE, the sides have played three draws including their last one in 2011.

India are underdogs in this tie against the host. The Blue Tigers will have a tough time preventing UAE from scoring and will get very few opportunities to score unlike their previous game. Given India’s current form under Constantine we can hope to get a good result from this encounter.