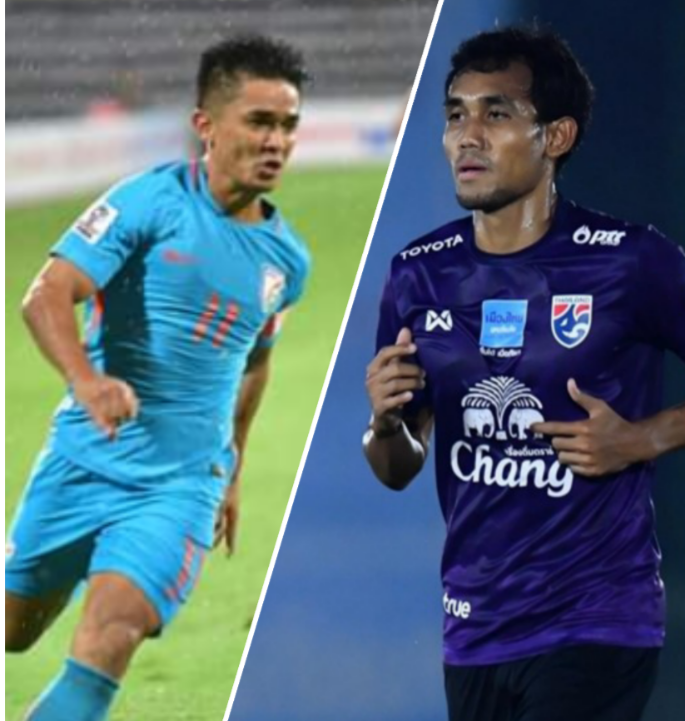 The 2019 AFC Asian Cup will start this Saturday and India will take on Thailand in their opening encounter in Abu Dhabi on Sunday. Both teams will be looking to win this encounter as it would guarantee either of them a spot in knockouts with the new format in place.

Despite being ranked 21 places below the Blue Tigers in the FIFA rankings Thailand are clearly a superior team in terms of quality. They have been going head to head against Asian giants both at club level and International level and have 3 Players Who played regularly at the J-League.

One concern for India heading into this game is lack of preparation. Thailand have played 9 games since October while India managed only 3 and are one of most underprepared teams in the tournament thanks to AIFF and FDSL.

Speaking ahead of the game Sunil Chhetri said “I can assure you that it won’t be an easy job for other teams to face us. We are a team who hate to lose, and we have proven it in recent times. We are working as per the plan.”

India will rely heavily on Chhetri for goals this tournament as the other strikers in the squad are having a poor season and none of them have surpassed two goals this season.Stephen Constantine time and again has proven that he can get some good results against relatively stronger sides the win against Kyrgyztan and draws against China and Oman are testimony to that.

The biggest concern for India heading into this game is the form of Anas Edathodika, Sandesh Jhingan and Pritam Kotal, They are expected to start for India but have been very poor this season for their respective clubs.

Thai midfielder Chanathip Songkrasin who plays for J-League club Consadole Sapporo said “I don’t have much information about India but the scouting team will show us their videos soon. The first game is always tough but our team has been improving and I’m sure we can earn three points from the opening game.”

Thailand are managed by Milovan Rajevac who took Ghana to the 2010 World Cup quater finals, he has done a great job at Thailand and has got some good results against European and top Asian sides.

Thailand will miss the services of their captain and number 1 goalkeeper Kawin Thamsatchanan who will miss the tournament due to an injury . They are lead by Teerasil Dangda who last played for J-League club Sanfrance Hiroshima.

Indias approach in this game will be defensive, the Blue Tigers will prefer to sit back and play on the counter-attack and try exploiting Thai defence with the speed of their forwards Nazary, Udanta and Chhetri.

Thailand on the other hand will play a 4-2-3-1 formation. They will prefer to hold on to possession and dominate the midfield. it is expected that they will play a high pressing band of football, pushing Indian players back and hence preventing them to establish any sort of counter-attack.

Unlike Kyrgyztan or China the attackers of Thailand are very profilic in front of the goal any mistake from India will have very big consequences. Constantine has preferred experience over form as more than half of the likely starting eleven have had a poor season and might haunt them if his plans do not work.

Sunil Chhetri – To score goals up front India will be dependent on ever reliable capatain . Scoring in Asian Cup wouldn’t be something new to Sunil, as the striker has already scored twice in the championship.

Pronoy Halder  – Halder is often regarded as India’s best Defensive Midfielder. With India’s defensive a lot will depend on him to win balls in the midfield break attacks.

Gurpreet Sandhu –  The performance of Gurpreer will be key to the game. A lot of expectations would be on the former Stabaek goalkeeper to put a solid performance and keep a clean sheet against the war elephants.

Teerasil Dangda – Dangda is the best striker in South East Asia and spent his last season at Japnese club Sanfrance Hiroshima who finished second in their league. He is a very clinical striker and will give the Indian defence a tough time.

Chanathip Songkrasin – The attacking midfielder plays for Japnese club Consadole Sapporo he scored eight goals last season to help them finsih 4th and was voted their most valuable player. He is also known for his creativity and dribbling.

Theerathon Bunmathan- Theerathon is a very versitile player who can play as a fullback or a central midfielder. The 28 year old spent last season at Vissel Kobe alongside Iniesta and Podolski.

India and Thailand have played each other 23 times and Thailand have dominated India winning. The war elephants have won 11 games while the Blue tigers have managed to win only 5 and the last one was back in 1986, 7 games between them have ended as draw.

The game will be a contest between India’s defence and Thailand’s attack. The war Elephants have always dominated India over the years and Constantine’s men will be underdogs heading into this encounter. The game is expected to be a low-scoring affair, although the Blue Tigers would hope to pull off their first victory in the Asian Cup over 50 years.