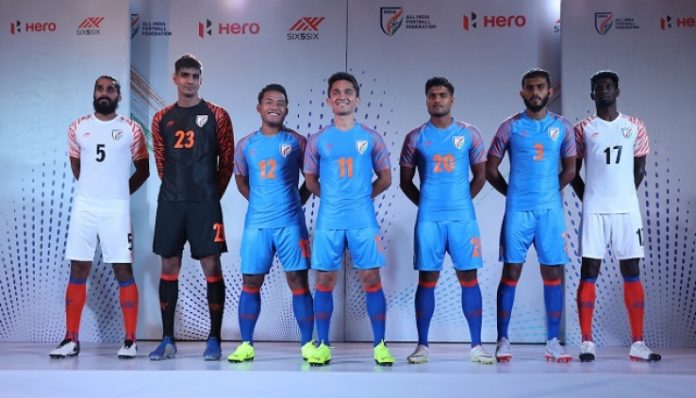 The AIFF recently announced Six5six as the new kit sponsors for the Indian Football Team and launched a New kit for 2019 AFC Asian Cup. We take a look back at the diffrent kits the blue tigers used over the last 12 years and rank them in order.

This has to be the most lasting kit for the national team in modern era. The kit was launched in 2010 before the AFC Asian Cup 2011 and was used for nearly 4 years.

The kit was also overused by EA sports in several FIFA games despite the kit being changed notable in FIFA 14 and 15.

This was Nike’s first ever kit for Indian and perhaps their most underwhelming work.

I am not a big fan of this present design by Six5six as I feel they have overdone the design of strips. Clearly the current kit has revived mixed response from the fans and the quality looks inferior compared to Nike.

This is one of Nike’s best designs for the national team the White stripe along the chest and white shorts were amazing and makes this one of my favourites.

The Design of this kit looks good though it strays away from classic colour used by India. Sadly we could only see the national team use this Jersey only twice.

I hated this Jersey when It was first launched before the 2017 U-17 World Cup but over the time I started loving it. Its simplicity is what makes it an amazing one.

This India’s most underrated kits ever.

This is Nike’s best design ever. Indian Football was having a poor time under Wim Koveermans and initially under Stephen Constantine. This Jersey was probably the only good thing about Blue Tigers in that period.

This is my favourite national team kit. It always looked vibrant and the use of orange in various areas in the kit was superb.

This kit was used by India U-17 world cup team in various preparatory camps and the 2016 AFC U-16 Championship in Goa. Though it strays away from classic blue colours of India this has to be best kit used by India at any level.