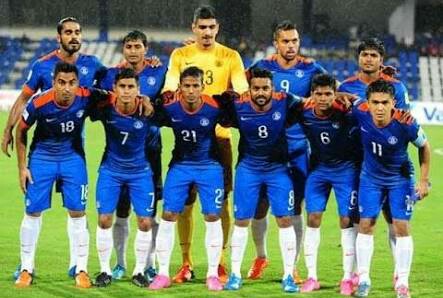 Indian Football Team will kick start their campaign in AFC Asian Cup qualifiers as they take on Myanmar away at the Thuwunna Stadium,Yangon. India have been clubbed in Group A alongside Kyrgyzstan, Myanmar and Macau.

India are ranked 40 places above the host in the FIFA rankings. India are 132 while Myanmar are ranked 172. But the last time they played each other saw the Blue Tigers lose 1-0  in AFC Challenge Cup Qalifiers which had eventually ended our 2015 Asian Cup Qualifying hopes.

The Blue Tigers are coming off from a shaky 3-2 win against Cambodia. The friendly would be a good for India as they returned to action after a gap of 7 months.

Sunil Chhetri though is expecting a very tough game and in an interview to the AIFF he said “Myanmar are one of the toughest Teams to face in South East Asia at the moment. It will be a tough challenge for us and we have to play to the best of our abilities if we have to win there,”

Though India won the friendly against Cambodia it exposed a lot of loopholes in India’s game.

The major concern for Coach Stephen Constantine would be India’s midfield. The team was losing too many balls in midfield and struggled to create chances in the first half. Eugenson Lyngdoh has been off color for a while and this would be a perfect time for the gaffer to give a chance to Milan Singh who has been impressive this season.

Another problem for India would be their defense. Fulganco Cardozo who is normally a center back struggled to adjust as left back. This would mean the coach Stephen Constantine might have to go back to Narayan Das or to give one amongst Jerry Lalrinzuala and Nishu Kumar a national debut

Up front India will have no problems, capatain Sunil Chhetri and the talismatic Jeje Lalpheklua are in very good form and Constantine will expect them to be on target against Myanmar this wednesday.

Myanmar are coming off from a comfortable 3-1 win against Indonesia U-22 away on 21st. The nation has seen some great rise in the sport and qualified for the FIFA U20 World Cup in 2015

Myanmar though had disappointing AFF Suzuki Cup were they managed to reach the semi finals but lost 6-0 on aggregate against Thailand in the semis. They will look to get back on track when they take on India.

In a bid to put up a strong performance the country has included 5 players who took part in 2015 FIFA Under 20 World Cup in New Zealand replacing 3 players who started in their last encounter against Thailand.

The match would be very important for India in their bid to qualify for the AFC Asian Cup getting 3 points in the game before they face a relatively higher ranked Kyrgyzstan in June.

The Indian coach Stephen Constantine has said “The hosts would start as favorites. They have qualified on merit for the FIFA U-20 World Cup. They are a very strong side at home. It will be a very difficult match for us.”

This is the second time that a Stephen Constantine coached India will take on Myanmar. During the 2004 LG Cup India under Constantine defeated Myanmar 2-1. He will hope to repeat that feat again but this time the stake would be much higher.

Sandesh Jhingan and Anas will play at the center of the defense along with Pritam Kotal as right back and Narayan Das is expected to make a comeback in the team.

Midfield will have the reliable Rowlin Borges who has emerged as the country’s best defensive midfielder. With Eugenson Lyngdoh off color Milan Singh might get the nod. Jackichand who had a good game against Myanmar is expected to start alongside Udanta Singh in the wings

Myanmar coached by Germen Gerd Ziese play a direct 4-4-2. Their capatain Yan Aung plays in the center of the midfield while 2015 Asean Youth Player of The Year Aung Thu will lead their attack.

Sunil Chhetri – To score goals up front India will be dependent on ever relaiable capatain . Scoring against Myanmar wouldn’t be something new to Sunil, as the striker has already scored against them in 2008 AFC Challenge Cup.

Rowlin Borges – In the last two years Borges has emerged as India’s best Defensive Midfielder. With Jhingan and Mondal just coming of injuries a lot will depend on Rowlin to win balls in midfield and stop the attack of Myanmar.

Gurpreet Sandhu – The performance of Gurpreer will be key to the game. A lot of expectations would be on the Stabaek goalkeeper to put a solid performance and keep a clean sheet against the hosts.

Aung Thu – At the age of 20 the striker is already 2 times Myanmar Footballer of the year and was the best performer in Myanmar’s U-20 World Cup campaign. He will be key to Myanmar’s quest for goals.

Yan Aung Kyaw – The Central midfielder also the captain of their Team will be key to Myanmar’s performance. He is known for his excellent creativity and equally good defensive play. His experience would be vital for them at this game.

India have had a much better form compared to Myanmar in the last 5 matches winning 5 out of their last 5 matches. The Last being a 3-2 win against Cambodia.

Myanmar though have won 3 out of their last 5 games they managed to reach the semi finals of AFF Suzuki Cup 2016 but lost by a huge margin of 6-0 on aggregate against Thailand in both legs of the semifinals.

Since 2000 India and Myanmar have played 3 times in which India have won twice but during their last encounter Myanmar won by a solitary goal ending India’s hopes of Qualifying to the AFC Asian Cup 2015.