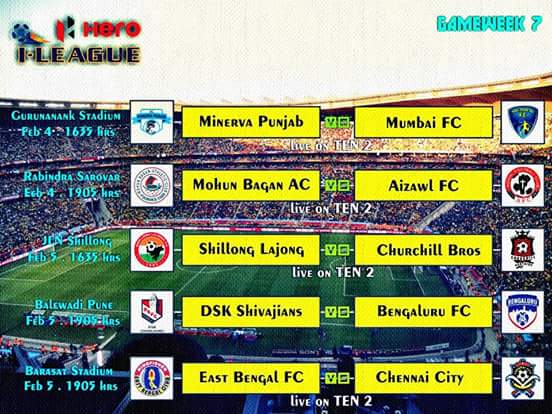 With Bengaluru FC and Mohun Bagan away on duty for their AFC Champions League qualification and AFC Cup matches, Round 6 passed by rather quickly. Shillong Lajong continued their resurgence by beating newbie Chennai City FC as Asier Dipanda struck twice and ensured that his side registered a victory three times in a row. February 1 had three matches, with Churchill Brothers taking on ‘last boy’ Minerva Punjab FC, Aizawl FC facing DSK Shivajians and East Bengal playing against Mumbai FC in the last game at Barasat Stadium. Much was expected of Churchill after their giant-killing act against Bengaluru in the previous round, but they failed to live up to expectations against a listless Minerva, with the game meandering to a 0-0 draw. Aizawl FC returned to winning ways, completely dominating DSK Shivajians in their own home ground, although they had to wait till the 89th minute for Brandon’s strike to win the game 1-0. Willis Plaza almost single-handedly won the match for East Bengal against Mumbai FC, scoring two goals in a seven minutes blitz to ensure a comfortable 2-0 victory and keep his side on top of the table.

Round 7 begins on 4 February with Minerva Punjab hosting Mumbai FC at Ludhiana. Minerva, who currently occupies the lowest spot in the table, has looked clueless both while attacking and defending. Even though Technical Director Colm Toal has joined the team, there has been no change in the team’s fortunes. Their foreign recruits like Loveday, Amobi and Filatov have been unimpressive to say the least and they would have to play out of their skins to salvage some prestige in this match. Mumbai FC, who would be coming on the back of three consecutive defeats would be licking their wounds and eye this match as an opportunity for a turnaround of their fortunes.

The next match—Mohun Bagan against Aizawl FC at Rabindra Sarobar stadium on the same day—could prove to the most interesting game of the round. Though Mohun Bagan’s winning streak was halted by DSK Shivajians in the previous round, their AFC Cup victory against Colombo FC would have done a world of good to their confidence. They would be bolstered by the return of Debjit Majumder, Pronay Halder and Kingshuk Debnath, although Sony Norde remains a doubtful starter. However, they face one of their toughest challenges against an inspired Aizawl. Once touted as the underdogs, Khalid Jamil’s charges have been one of the most consistent performers of the league, currently occupying the third position in the table. Even if their star performer Mahmoud Al Amna misses out due to injury, they have enough firepower in the likes of Isaac, Brandon, Alfred Jaryan and Jayesh Rane to upset the applecart of any team.

There would be three matches on the next day, with Shillong Lajong hosting Churchill Brothers, Bengaluru taking on DSK Shivajians at Pune and East Bengal squaring off against Chennai City FC at Barasat. Thangboi Singhto’s men would definitely want to continue their fine run of form. Their main striker, Asier Dipanda (currently the top-scorer along with C.K. Vineeth) has hit a rich vein of form and would pose a constant threat to the opponent’s defence. Churchill Brothers themselves would like to prove a point or two in this match. Anthony Wolfe cannot be expected to shoulder the entire responsibility alone and it would require the likes of Chesterpoul Lyngdoh and Surabuddin Mallick to fire in unison if they want to make a match of it.

Bengaluru FC have lost three matches on the trot (including their AFC Champions League qualifying match), something which has been almost unprecedented in the history of the club. Cracks have started appearing in the defence and the forced replacement of Roby Norales is another blow to the team. Questions have also been raised about Albert Roca’s tactics.  But Bengaluru have proved critics wrong quite a few times in the past and with quality players like Sunil Chhetri, Udanta Singh, Lyngdoh and Vineeth in their ranks, it is expected that the current downslide is only a temporary blip in the radar. DSK, on the other hand, have had a stop-start beginning in this year’s campaign. It was expected that holding Mohun Bagan would provide them with a major boost, but they meekly surrendered the initiative when they capitulated against Aizawl in the next round. However, they are a very unpredictable side and with players like Quero, Kim, Jerry, Seityasen Singh and Milan Singh in their ranks, they can easily cause one or two upsets on a given day.

The match between East Bengal and Chennai City FC is expected to be the most one-sided one in this round. The combination between East Bengal’s forwards, Wedson and Willis Plaza is getting better and the midfield and defence are gradually shaping up. It is expected that due to the unavailability of Mehtab Hossain and because of the prospect of the derby in the next week, Morgan might try out some different permutations and combinations and give chances to some of the new faces in the squad. Chennai’s Brazilian forwards, Marcos Thank and Charles have been impressive only in patches, the defence has also looked shaky and they would need a gargantuan effort to stop the Red and Yellow juggernaut.

(The article is written by our forum member ‘thebeautifulgame ‘)