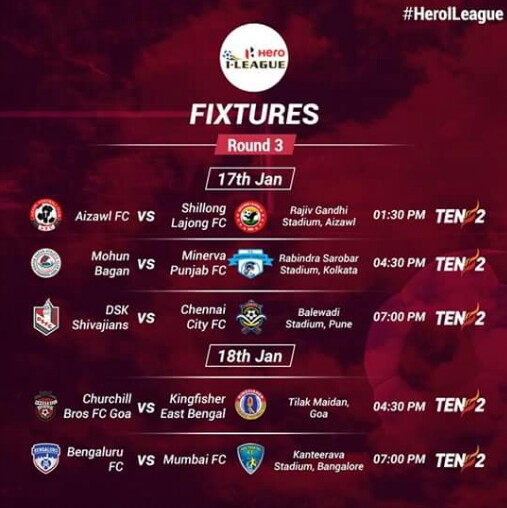 The I-League is slowly starting to heat up. All the games in Round 2 turned out to be decisive. In the first match of the Round, Aizawl FC defeated Minerva Punjab 1-0, courtesy an Ashutosh Mehta header in injury time. Syrian import, Mahmoud Al Amenah, who was making his debut in this match, proved to be their most potent threat, though Aizawl were undone by the performance of their forwards, especially Stephen Kamo, who missed two-three easy chances. The next match saw Mohun Bagan notch up their second successive win of the tournament against Lajong FC, with Scottish striker Darryl Duffy bagging a brace.  East Bengal finally managed to show some form, as they outclassed DSK Shivajians 2-1 in an away match, with stellar performances by their strikers Wedson Anselme and Willis Plaza, who scored the two goals. In the same day, Bengaluru FC proved why they are the strongest contenders to the crown as despite being held by a comparatively weak Chennai City FC defence till the 77th minute, they scored two goals in quick succession via their Honduran import Roby Norales and C.K. Vineeth to seal the match. Finally, it was Mumbai FC who have proved to be the surprise package in the League as they secured their second successive win, a 2-1 win against Churchill Brothers, with goals by Victorino Fernandes and Karan Sawhney cancelling out an early goal by Churchill’s Brandon Fernandes

Round 3 begins on 17th January with the “Hill Derby” between Aizawl FC and Shilling Lajong at Rajiv Gandhi Stadium, Aizawl. Both the teams have a lot of local talent and a similar style of playing; hence they would be very well acquainted with each other. Aizawl is currently on a high, drawing with East Bengal in the 1st Round and winning against MPFC in the second, and Khalid Jamil’s men would like to keep the momentum going. Shillong Lajong currently occupies the lowest place in the table, and they would be aware that anything other than a win in this match would severely dent their prospects.

In the next match later that day, Mohun Bagan takes on MPFC at the Rabindra Sarovar, Kolkata later in the day. Fresh from two consecutive victories and boosted perhaps by the likes of Eduardo and the talismanic Sony Norde, they would be keen to keep their home record intact and garner another three points from this match. Minerva Punjab would know that they have their task cut out and they would need all their players, particularly their forwards like Manandeep Singh, Joel Sunday and Uttam Rai to fire in unison if they want to shake off their ‘minnows’ tag and stay alive in the League.

The final game of this day would see DSK Shivajians pit themselves against Chennai City FC. DSK had built an impressive squad on paper with a healthy balance of Indian talent and foreign recruits, but their performance in the last two rounds has been underwhelming to say the least. Coach Dave Rogers would be aware that anything other than a positive result would mean that his job might be on the line, and it would be interesting to see how his players respond to his pep-talk. Chennai City’s performance, except perhaps their goalkeeper Karanjit Singh, has been very disappointing, and players need to take their performance to another level if they want to make any impression.

The next day, 18 January, would feature two matches, East Bengal versus Churchill Brothers and Bengaluru FC versus Mumbai FC. Churchill Brothers would host East Bengal on Tilak Maidan, Goa. Churchill did show some flashes of brilliance in the opening match against Mohun Bagan but they rather fizzled out in the match against MFC. With only one foreigner, Trinidad and Tobago international, Anthony Wolfe, having joined the team and the coach yet to arrive, they need to punch above their weight to get a positive result. East Bengal would be buoyed by the result of their previous match as well as the performance of the forwards, though the defence still looks to be vulnerable at times in spite of the calming presence of Bukenya. Complacency is one factor they have to guard against, as Goan teams have managed to frustrate teams from Bengal time and again on their home ground.

BFC vs Mumbai FC, the concluding match of the round, could prove to be the most interesting.  There is no doubt that BFC are a much stronger side  with four quality foreigners and lots of exciting young Indian talent in the form of Udanta Singh, Sena Ralte and C.K. Vineeth. But Mumbai FC, coached by the canny Santosh Kashyap and playing without a single foreigner, have been giving the opposition a run for their money. Their real test would of course come on the 18th when they take on the Men in Blue.

With two rounds gone, the teams need to take stock of the situation. The players have more or less settled in, teams are in a better position to analyze their opponents and things can only improve from here. Here’s hoping that Round 3 promises to be exciting and competitive and brings cheers to the individual teams and the spectators alike!

(The article is written by our forum member ‘thebeautifulgame’)