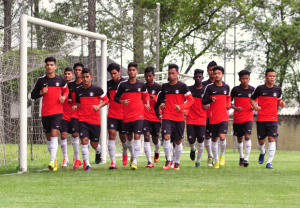 Part of the delegation from India arrived last Wednesday (30) to the CAT, while the last members landed in the capital of Paraná on Friday morning (2). In the afternoon, the German coach who heads the team, Nicolai Adam, guided the first training in CAT.

“It’s a beautiful structure, nothing is missing here. It’s all like Germany: same weather, beautiful countryside and infrastructure. I’m really impressed and it will be great to be here, “the coach said in an interview with the Official Site.

“I expect high-quality opponents. I know two Atletico Paranaense players who played in the Subroto Cup in India. So the quality should be good. Brazil is a nation with a tradition in football. I believe it will be a great tournament, “added Adam, about the competition.

Luiz Greco, director of International Relations at Atletico Paranaense, highlighted the arrival of the first team for the competition. The Uruguay National Team and Orlando City will land in Curitiba on December 9.

“We have a very high expectation with the arrival of the first delegation, which is part of the cooperation agreement that Atletico Paranaense has with the Indian Football Federation. Not only the athletes, but also the coaching staff, are extremely impressed with our structure, and we could already expect that. Everyone is very happy, looking forward to great preparation for our international tournament, “Greco said.

Due to the postponement of the match against Flamengo, the international tournament had changed dates. The first three rounds take place on December 12, 13 and 14. The semifinals will be on December 16, while the decision and the third-place race will be held on December 18. All duels take place at the Atlético Paranaense Stadium.

Each team will enter the field five times in the competition, in double rounds. In the first phase, everyone faces a single turn. Through the classification of the initial stage, the semifinals will be defined [1º x 4º and 2º x 3º]. The winners of the semifinals dispute the decision, while the losers enter the field for the third place match.

The game table will be defined in a technical congress, which will be held on December 9, at CAT Alfredo Gottardi training center