This article was written before Nepal’s 0-0 draw against India on 31st August, 2015.

The national football team of Nepal is currently going through its worst phase spanning over two decades. The team has fallen to an all-time low in the FIFA rankings. There is no indication that it is making a comeback. Certainly, the seemingly endless struggle continues.

Given the sad state of affairs, uncertainty surrounds the future of Nepal football. Team Nepal’s success at the 1993 South Asian Federation Games in Bangladesh still remains the benchmark. Over the last twenty plus years, leave alone achieving the benchmark, the national team has not even come close to matching it. They had a golden opportunity to end the title drought in the last edition of the South Asian Federation Football Championship (SAFFC) held in Kathmandu in 2013, but they squandered it.

The real anger and frustration is that very little has been done by All Nepal Football Association (ANFA) under the corrupt, failed leadership of Ganesh Thapa to bolster the development of football. The football body has totally failed to provide players with an environment in which they can thrive and feel secure. Not surprisingly, active national players leaving the country for a secure and better future are on the rise, and it is growing at an alarming rate. The way things stand today; there is little hope that things will change for the better in the foreseeable future. We have the same incompetent, inept, dishonest people at the helm responsible for the stagnation of football for so long.

I reckon every football buff in the country knows Mr. Thapa led ANFA is the biggest problem Nepal football faces moving forward. ANFA is primarily responsible for building or rebuilding a successful national team, which unfortunately has not been the case. They have no credibility and lost morale high ground. Mr. Thapa remains high-handed, arrogant and dictatorial. He likes to remind his critics and rivals that he has power and support of FIFA and AFC. Despite everything, Team Nepal is gearing up for yet another edition of the SAFFC to be held in India later this year. As part of the preparation, they are scheduled to play against India in a friendly on 31st August in Pune, India (The result was 0-0).

With the American-Polish Coach Jack Stefanowski gone, following his disastrous stint with the national team, homegrown Dhurva KC stepped into his shoes. Coach KC shoulders responsibilities at a critical juncture with Nepal football at rock bottom and players morale at its lowest ebb. Upon his appointment as head coach, Mr. KC was quick to make a bold statement by comparing Nepal’s playing standards with India. “We are at par with India in terms of playing standards,” he said. No one doubts that we have a talented bunch of footballers. We all agree that they have the potential to perform much better. Sadly, they have been badly let down by a dysfunctional, implausible football body. The fact of the matter is that players are being held hostage by ANFA and constantly scapegoated and scorned for the team’s mediocrity. Players’ woes worsen by the day because of their inability to revolt against ANFA’s administrative debacle, bullying and intimidation.

Coach KC should not forget the fact that more than words, action and result matters the most, at the end of the day. Having been in the coaching business for a fairly long time, he is fully aware of the challenges he and the team faces, coupled with the complexities and dirty politics surrounding Nepali football. Like all coaches in the past, he is in the hot seat and under tremendous pressure to yield results. I do not believe he can succeed, not in the current setup.

As I write, Coach KC’s first crack at being a head coach could end up short-lived, with the appointment of Belgian Patrick Aussems as the new head coach of Team Nepal. There is no reason for optimism or enthusiasm, and the new appointment will do nothing to motivate and excite the football community because the situation remains unchanged. The Belgian, no doubt, has a daunting challenge ahead of him. He takes charge of a slumping team that has been underperforming for quite sometime. Like his predecessor Stefanowski, he faces major impediments. It is yet to be seen whether or not he can overcome the challenges. Furthermore, Coach Aussems has to deal with ANFA President who likes to be in charge, wants everyone to do things his way. We will have to wait and see what he does with the national team. Hopefully he does well and can prove himself. 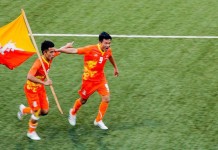