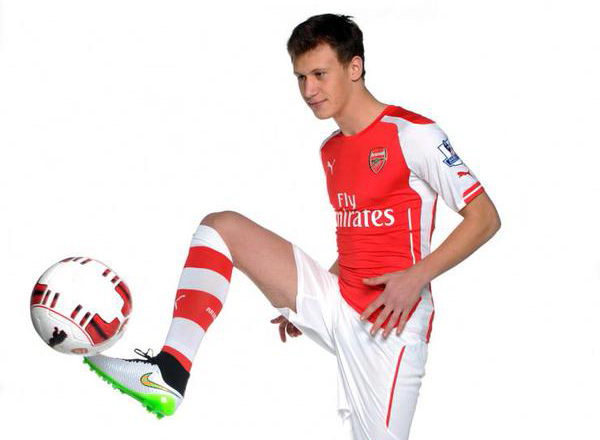 Krystian Bielik- the new “Patrick Vieira”, as they are calling him, recently completed his £2.5 million move to the Emirates in January transfer window. For a 17 year old teenager, paying such a hefty fee has raised eyebrows over footballing fraternity. But, Wenger’s talent spotting abilities can never be doubted either.

Arsenal felt the need to sign a holding midfielder with Flamini failing to deliver on regular basis. Francis Coquelin’s sudden emergence into the middle of the pitch has somewhat comforted Wenger and gifted him the flexibility to sign a young prodigy in stead of a proven professional. Now let us peep into the fact why the gunners were so desperate to bring in the Polish wonderkid in spite of getting rejected for the second time.

Standing at near 6’2” tall, he is expected to be a threat from crosses and set-piece situations. When we see that four of his five goals this season has come from pin-point headers, we get to know that this kid knows how to exploit his strength.

Can contribute in both defence and attack

Apart from that, he has got different attributes of midfield play built in himself. He can dictate the pace of the game right from the middle of the pitch with his distributional abilities. Without costing much effort, he can comfortably sit back and play well-disciplined football with neat short passes, that’s what you need from a CDM at first. Now from an attacking point of view, he is capable of making vital interceptions and feeding the forwards with accurate long balls leading to a counter.

Bielik has previously moved to Legia Warsaw from Lech Poznan in summer of 2014 for £8,800. Legia and Lech has remained bitter rivals over the years and it takes some strong intent to switch over between rivals at such young age. After that controversial move, his rise was quick from the second reserve to the first team. But, even then he has managed to play less than 10 hours of senior football till date. Now, it’s a huge risk for an youngster like Bielik to join Arsenal as his senior team playing chances may get even more scarce.

Interest from other big clubs

The Polish kid also had options other than the North-Londoners in this transfer window. He travelled to Germany to talk with Hamburger SV, they offered a much better deal than Arsenal and the promise of a place in the starting lineup. But, Bielik’s respect and belief towards Arsene Wenger made this move happen. Talking to a close associate, he once mentioned that the fact – Wenger fielded three under-17 players in Champions League clash against Galatasaray – made him believe that he would also get his chance to show his potential at the biggest level.

Bielik’s dream journey to one of the football’s greatest clubs was not smooth. When he was just aged 14, he faced a severe injury which put his career on doubt. He could not play for seven long months and during this hard time, he had only Lech Poznan authority to thank.

Now to get into some serious transfer statistics, we find that Bielik’s transfer fee to Arsenal is sixth highest in terms of players moving their way out of Polish League. The present national team captain Jakub Blaszczykowski was traded to Borussia Dortmund for £100,000 less than that of Krystian Bielik. Moreover, he is Arsenal’s third signing from Legia Warsaw after the goalkeeping pair Wojciech Szczesny and Lukasz Fabianski. All these transfers fell in place due to Arsenal’s senior scout Tom Pasieczny, who is Polish by birth.

Needs to work to match the physicality of English Premier League

Finishing everything factual and technical, we go on to find some nickname for the new starlet. ‘Bielik’ in Polish translates to ‘Bald Eagle’ in English and that would not sound too bad when pronounced along with The Ox, BFG and so on. After his move, the Polish teenager stays with a local family in London and takes English lessons three hours a day for obvious reasons. But, besides acquiring the needful. the 75-kg teenager also needs to gain some weight in order to keep up with the physicality of English football.