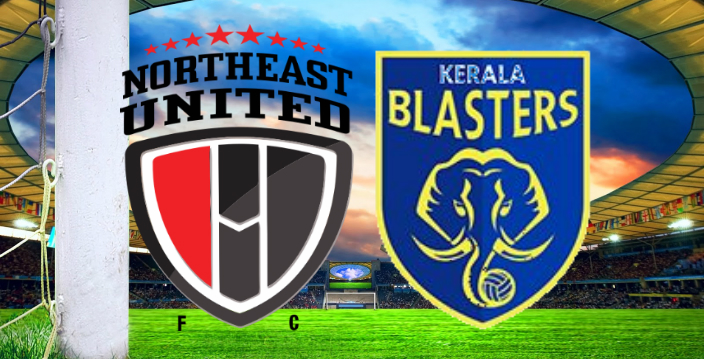 Here we present 10 tweets which summarize the game.

The game was played in front of a packed stadium. The fans came in numbers to support the home team.

A jam packed crowd, a total sellout and now the Highlanders take the field in front of their home crowd @NEUtdFC #LetsFootball

North East United, although a Guwahati based team, aims to connect with all the eight North Eastern states. They seem to be on course.

The NorthEast states are united! And this, is only the beginning. Here's to many more wins! @NEUtdFC #LetsFootball #TheHighlanders

Former East Bengal player Penn Orji was one of the top players for Kerala Blasters.

Penn Orji has been playing in India for 5 years now. Understandably more comfortable with the pitches and weather. #ISL

Durga Boro almost became the first Indian to score in ISL. David James has other ideas. Both the shot and the save was world class.

Koke scored for NEUFC in the dying minutes of first half. Here’s a PJ!

Michael Chopra was disappointing today… I remember how we begged him to play for India back in his better footballing days.. #isl

Despite Kerala’s dominance, they could not score. I man who stood between them and the NEUFC goal was Greek goalkeeper Alexandros Tzorvas.
https://twitter.com/_LetsFootball/status/521695613290049536

We are still waiting for an Indian to score a goal.

@IndSuperLeague 4 goals till now but Indian yet to open the account. #LetsFootball

Kudos to the fans.

Special Mention to our fans, who've been absolutely fantastic during right from the onset of the #HeroISL and leading up to the first game!