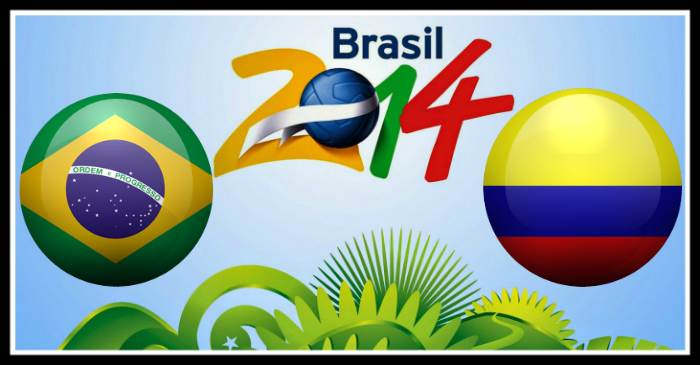 To watch Brazil vs Colombia online please find the link at the end of this article.

The Latin American rivalry continues in this world cup as hosts Brazil meet rivals Colombia. Brazil’s performances have given much to rue about while perennial under-achievers Colombia has been one of the most impressive teams this world cup.

Brazil fought hard against Chile, only to make it through to the quarter finals after winning the game on penalties. Brazil’s attack looks a bit blunt and striker Fred and his replacement Jo looks nowhere near the standards set by Sambas for years now. Neymar has done well in this tournament so far, but expecting him to deliver the goods every time would be a bit heavy for this 22 year prodigy’s shoulders.

Colombia looks competent in both defense and offence. With James Rodrigues in red hot form, scoring in each of the four matches so far, they have one the most prolific forward lines. Juan Cuardado has done really well, giving many assists. Teo Guettirez can be handful as well. The forward runs by full backs – Zuniga and Armero have added to the threat as well. In defense they look solid with Yepes and Zapata while goalkeeper Ospina had a solid tournament as well.

Brazil, of course, will be bolstered by massive fan support. However, there are reports that the last game have mentally drained this young Brazil side and they are being consulted by a psychologist. However, Scolari says that this game won’t have so much intensity as Colombians are friendly foes as opposed to Chile. The intensity will be less and the Brazilians would find it easier. However, it is likely that Scolari is playing kind games here.

Colombia with talents of James Rodrigues, Juan Cuadrado, Zuniga, Jackson Martinez, Teo Guettirez, Ospina looks like a strong side and would not let this opportunity go when they face a slightly under par Brazil.