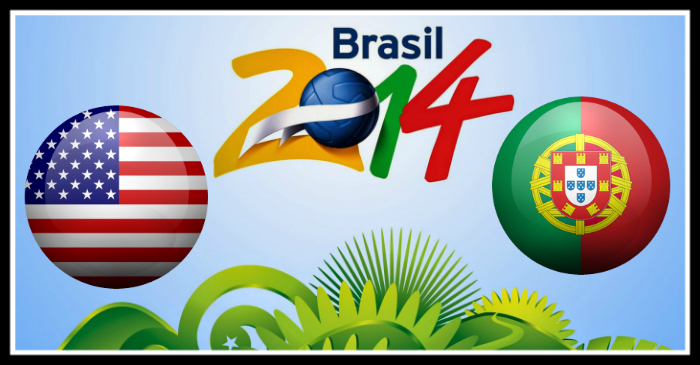 USA got three full points against Ghana after a gritty and hard earned win. Dempsey scored the fastest goal of this world cup by scoring as early as 31st seconds. Ghana kept on attacking but the American defence kept them at bay for most of the match before conceding towards the end. However, USA again got a goal towards the end of the game to seal full points for them.

Portugal had a shocker of a game where they were not only humiliated by Germany by a margin of four goals but also got Pepe red carded, meaning he misses this game, and Fabio Coentrao injured, who misses the tournament. Furthermore, star player Ronaldo’s fitness is under question. With a demotivated team and major absentees, Portugal’s chances in the world cup look bleak.

Jurgen Klinsmann’s side has three points and would like to hurt the Portuguese team ravaged by absence of major players and injury concerns of Ronaldo. A win will take them at the top of their group which features Germany, Portugal and Ghana. Klinsmann’s diamond shaped midfield have served the country well with the talented Bradley taking the peak of the diamond and Beckerman at the defensive role.

The team uses two front man above the diamond. The full backs tirelessly work to support attack and the creativity of Bradley is a main threat in the midfield. Physically, the team is top quality and they would try to impose that on the Portuguese counterpart.

Key player Bradley and his fellow midfielders were overrun by Ghanian midfield and they would hope that his is not repeated again. At the front, USA lacks quality player who can replace Jozy Altidore and either Aron Johannsson or Chris Wondolowski are expected to replace them. Dempsey, who opened the scoring and played with a broken nose will have to play a key role. Although he scored the goal, he was not influential for most part of the game.

One important member of the team will certainly be Tim Howard, whose excellent positioning and saves have kept Ghana at bay. An experienced goalkeeper, Howard will need to use all his skills and experience to keep Ronaldo and co. at bay.

With Ghana – Germany draw, USA has a  fantastic chance to go at the top of the group and qualify for the next stage by winning against Portugal. A draw will keep them level with Germany and considering that they face Germany in the last game, they would not want to risk things till the end.

For Portugal, this is a do or die game. Another loss, and they are out. Germany has 4 points and if USA wins this, they will have 6 points. A draw will keep them alive, but only just. Then they will have to win against the impressive Ghana and hope that USA is beaten by Germany. Clearly, they would like to win this game and keep things simple for the end.

Paul Bento’s team plays a 4-3-3 formation with  full focus on Right wing Ballon d’Or winner Cristiano Ronaldo. Postiga is the lone striker, but he tends to drift left wards to create space for Ronaldo to cut in from the right flank. Nani uses the left hand channel to flick those crosses. The three man midfield is  mostly compact.

Bento’s had nnumber of problems in hand. Main central defender Pepe is suspended. Key man Ronaldo is not fully fit. Right full back Coentrao is injured. And in the last game,  the custodian Rui Patricio and striker Hugo Almeida picked up injuries and their participation is also bit doubtful. In this hot humid conditions and against a physically impressive team like USA, Portugal might be asked big questions. One might say that Portugal probably seems over dependent on Ronaldo and lacks depth in the squad.

On paper, Portugal looks like the better team. They have some world class quality as well. But the team is over dependent on Ronaldo, who is not fully fit as well. Klinsmann’s team will definitely have a plan for Ronaldo and would probably be able to shut him off for most part of the game. This may, however, open chances for Nani and co. USA will depend on counter attack and set pieces. One key battle will be midfield domination and with Veloso, Meireles and Moutinho, Portugal looks more likely to have a midfield domination. Bradley’s role will be key again for USA, and if he doesn’t deliver like the last game, it will be tough for the yankees. With a solid backline and a fantastic goalkeeper, USA might keep Portugal at bay for most of the game.