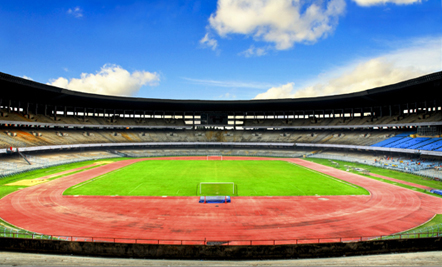 West Bengal State government has decided to introduce a Public-Private Partnership model for maintenance works of its major stadiums.

The decision roots from the fact that WB government is finding it very difficult to maintain its stadiums as the allocated budget is very less compared to actual maintenance cost. Apart from the stadiums, they are also planning to include the existing adjacent facilities like gymnasiums, swimming pools, table tennis boards, badminton courts, jogging tracks etc. These facilities will be renovated with the help of private companies and will be made accessible to common people who will have to pay a membership charges in return. The fees will be less compared to charges made by gymnasiums, pools owned by local clubs or private fitness centers.  These stadiums will be lent to corporate houses to arrange their own annual games. These adjacent facilities remain unused most of the times of a year; hence giving access to common people won’t disturb any particular sporting event. Initially Vivekananda Yubabharati Krirangan (Salt Lake Stadium), Rabindra Sarobar Stadium & Netaji Indoor Stadium will be considered under this scheme.

Tenders have been submitted

Notice inviting tenders for renovation, construction and operations will be published soon for the entire set-up. For consultations regarding the entire project and operation, reputed companies like Earnest & Young, PWC and nine more were invited. All the parties submitted their bid for consultation by 21st of April. WB government is going to shortlist and finalize the contract for consultancy soon.

Apart from that they have approved construction projects of 26 new arenas in various district of West Bengal. Midnapur district will have most of them. Among them few will be indoor type with badminton courts and archery & shooting facilities. Few of them will be dedicated for cricket. Rest will be only for football and athletics.  The news is a huge boost for dying sports infrastructures in the state. Young talents will have some platform to launch their sporting career.  However, Vivekananda Yubabharati Krirangan could be exempted from the scheme as it will undergo a major renovation work for hosting few matches of Under-17 FIFA World Cup. And the adjacent facilities of the stadium are already being used by Sports Authority of India Limited and many other sporting associations.

Scope for  both financial and promotional opportunities

As per the source almost 120 cr. required to maintain major stadiums in West Bengal. The finance department allocates almost half of that amount. The balance amount comes from several entertainment events. People are still skeptical about the revenue amount to be generated from the aforesaid scheme. However as per me, it is better to let people have access to the stadiums (except match pitches) as it will trigger a healthy sports culture among the young generations, good health among elders and corporate people can maintain their passion for sports. Hopefully this concept will prevent occurrence of wedding reception, music concerts or opening ceremony of mega events on football grounds.