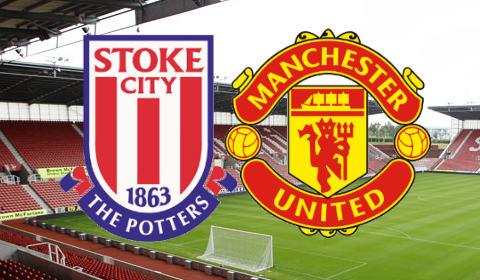 To watch Stoke vs Manchester United live streaming free ronaldo7 justin tv link is give at the end.

Man United travel to the Britannia Stadium today to play Stoke City FC at a time when there is a lot of positivity in the Red Devil camp. Ending their losing streak, Man U defeated Cardiff City at home last week.

Return of Robin van Persie and the new signing Juan Mata have bolstered their campaign which is realistically targeting a top four finish to secure a position in the Champions League next season for Man Utd. Persie would like to continue his incredible scoring record against The Potter, having scored 9 goals in the last 8 meetings with Stoke City.

Stoke vs ManU game is not on TV in United Kingdom. Live stream link is given at the bottom.

ManU are currently placed 7th with 40 points in 23 games, 6 points off Liverpool who have been pushed to the 4th rung after a shock 2-2 draw against Aston Villa at home about two weeks ago. Stoke are fighting the relegation battle with just two points separating them from the danger zone.

Barring the last 4-0 defeat at the Britannia, The Potters have done reasonably well at home having remained undefeated in 7 consecutive home games.

Stoke City will miss the services of midfielder Steven Nzonzi who is serving suspension. Peter Odemwingie and John Guidetti (loaned from Man City) may get starts.

David Moyes may decide to use van Persie and Wayne Rooney sparingly today as they have recently recovered from injuries and he would want to preserve them for more difficult fixtures of Man Utd.

Stoke City vs Man Utd will be telecast live on Star Sports 4 in India at 8:30 PM IST (3 PM GMT). Viewers in UK will not be able to watch it on TV while audio streaming will be available on MUTV Online. A free streaming may be available at the following link: