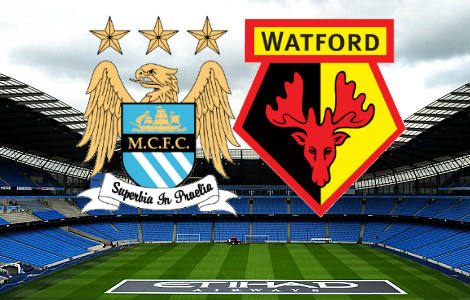 87′ GOAAALLL!! Kolarov is the scorer. And Man City have finally taken the lead, might be end of the road for valiant Watford…

80′ GOAAALLL! SERGIO AGUERO!!! Man City finally equalize. Can they snatch it away from Watford in the last 10 minutes? How heart-breaking that would be!

21′ GOAAAL! Forestieri scores and gives an unexpected lead to Watford against the giants!

Manchester City will host Watford FC at the Etihad Stadium today in the fourth round clash of FA Cup. It doesn’t need a mention that City are the overwhelming favourites in the game as they are pushing strong in all the competetions including English Premier League.

The Sky Blues are on a run winning all of their last 5 matches, particularly at home where they have remained undefeated since early November. Watford, on the other hand have won just one game in their last 5 and are currently a mid-table Championship team.

The hosts will miss the services of David Silva who has suffered a minor hamstring injury while Negredo has not recovered yet and may not even featyre in the EPL match against Tottenham Hotspur. Man City vs Watford live streaming link is given at the bottom.

Clearly, City are not taking this game lightly and would like to keep shining their scoring boots at home. Sergio Aguero and Edin Dzeko would feature in the team giving the extra sharpness to the attack. It is going to be another high scoring event for the City unless Watford pack their defense up and park the bus.

Man City vs Watford will not be telecast in India on TV, kick-off at 8:30 PM. You can watch it on SiTV live and exclusive. Live streaming online link for the match for the match is given below: