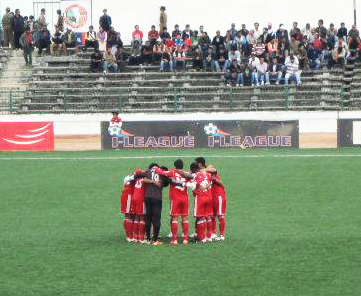 SHILLONG: Missing three key players did not faze Shillong Lajong FC as they were able to fashion a 2-1 victory over Salgaocar FC at the JN Stadium here on Friday evening.

There were jittery moments for the home team in the second half, but they were still able to hold on to a crucial win, only their second at home in 9 outings, while Salgaocar lost their third match in a row.

Injuries before the game meant that Lajong were without captain Minchol Son and strikers Uilliams Souza Silva and Cornell Glen, but Seikhohao Tuboi and Subash Singh led the way by scoring for the hosts. Prolific striker Darryl Duffy scored for Salgaocar.

The match started a little slowly, with neither team really able to create an advantage.

Tuboi’s goal seemed to take everyone by surprise, including the spectators. A lofted kick forward found Tuboi unmarked on the left flank. He had to control the ball quickly and executed his kick perfectly, placing it to the left of the goalkeeper, Karanjit Singh in the 22nd minute.

The Reds delivered another blow to the Goan team in the 38th minute. The lightning quick Subash is always dangerous and Salgaocar were not alive to the possibility of his charge forward. In the centre of the pitch, he was fed a lovely through ball and sprinting past two defenders, the slotted the ball into the net past the onrushing Karanjit.

Salgaocar were not without their chances and SLFC goalie Lalthuammawia Ralte, who was fielded in place of the regular Vinay Singh, had to make a double save in the 41st minute.

The diminutive custodian had to first block a Duffy strike, which rebounded, and then had to collect the ball from a Fulganco Cardozo strike.

Salgaocar pressed forward in repeated attacks but looked slightly frustrated as they were unable to put one into the net. Three minutes of added time did not bring any benefit to the Goans and the half ended 2-0.

The Greens pulled a goal back six minutes into the restart with Duffy scoring his eighth goal of the season. With the ball played into the box, Lajong were not alert enough and the Scot leapt up to head the ball in.

There was little for Karanjit to do following the goal, with Salgaocar going all out for the equaliser. Ralte, on the other hand, was called upon repeatedly as he and the defenders desperately kept the Goans at bay.

Despite not conceding, the Reds were guilty of losing possession too easily, which gave the visitors repeated chances to attack.

The game became more evenly balanced in the last 20 minutes and each side harried the other and that kept the 6,000 fans enthralled right to the end as Lajong held on for the 2-1 win.