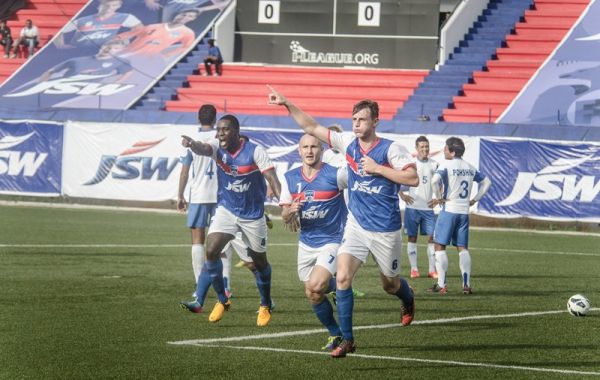 Bangalore: Bengaluru FC turned on the style, romping home to a historic 3-0 win over Rangdajied United in a Round Two I-League game at a sold-out Bangalore Football Stadium, in Bangalore on Sunday.

Striker Sean Rooney’s second goal in as many games was sandwiched between goals from John Johnson and skipper Sunil Chhetri as Ashley Westwood’s boys made it four points from two games in what is their debut I-League season.

Johnson sparked life into what seemed like subdued first half when he rose to head home a Beikhokhei corner. Rangdajied looked ragged and didn’t have a clear chance at goal. The absence of seasoned defender Lamine Tamba, out with a muscle, didn’t help their cause. Beikhokhei had a hand in the second goal in the second half when he slid one in for Rooney. The Australian made no mistake while tucking home from close.

The 7000-odd crowd was vocal all throughout in their support for the home team and the boys responded. The defence was tight, the midfield, fluid and the strikers, sharp. The best move of the evening ended up in a third in the 67th minute. Released on the left, Chhetri tapped one to Rooney only for the Australian to play Chhetri back. At his clinical best, the captain beat ’keeper Shambu Mistry from close with a beautiful finish to seal three points.

Not satisfied with the three-goal cushion, Bengaluru kept pressing and Westwood explained the intent at the post-match conference. “The game is played over 90 minutes and a little more. We play every minute like it’s our last,” said Westwood.

He also added that he was never worried about Chhetri hitting the target. “He’s a smart player and knows what he is doing.”

Rangdajied coach Santosh Kashyap was gracious in defeat. “Our boys are inexperienced and that showed. As for Bengaluru FC, they passed, attacked and defended really well. They played perfect football.”