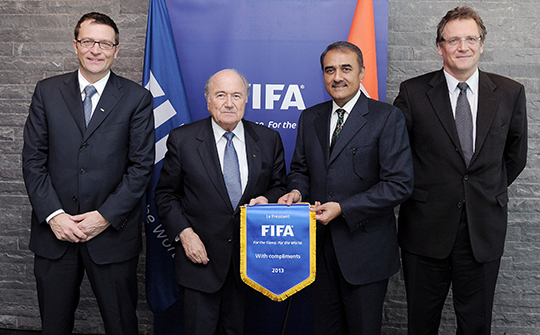 The All Indian Football Federation got a major boost in its bid to host the FIFA U17 World Cup 2017 in India after the Govt. of India cleared all the red tapes in the way of the mega event.

It took a long time for the ministry to take a call on it and the FIFA who have been generously willing to let India host  the event have been lenient with the deadlines. Sources say that the GOI did not want to host any sporting event on the back of a major scandal in the Commonwealth Games, Delhi 2010. But a persistent pressure from the AIFF president and cabinet misiter Mr. Prafull Patel saw it come through.

This clearance means that the major requirements for visas, tax exemptions, securities etc associated with these kind of events. This has almost confirmed India as the hosts of the 2017 FIFA U17 World Cup and ust the formalities remain.

The GOI has also approved Rs 120 crore for the up-gradation of the 6 stadiums in India which include the Salt Lake Stadium, Kolkata, the Nehru Stadium, Delhi, Cooperage Stadium in Goa and the Banglore Stadium.